Most automatic teller machines (ATMs) at local banks in Japan do not accept credit, debit and ATM cards issued outside of Japan. Foreign bank cards can be used at ATMs located at all Post Offices across Japan and Seven Bank ATMs located at over 10,000 7-Eleven convenience stores.

There are plenty of ATM cashpoints in or around Kyoto Station at which you can use foreign bank cards. In this article we will be looking at the most convenient locations, how to use the machines and also introduce a some locations for currency exchange. 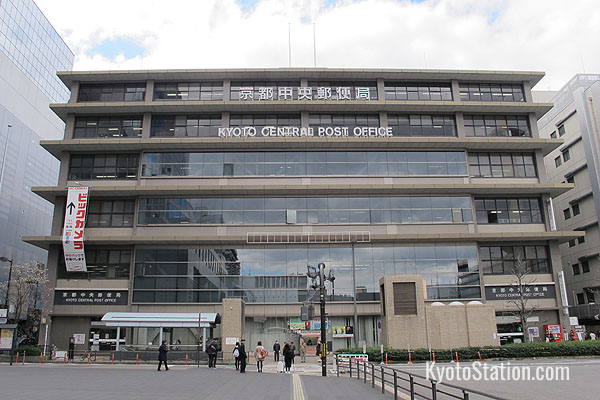 This is the most convenient location in which to find ATMs. Just step outside the north central exit of Kyoto Station and turn left. You’ll see the Post Office right ahead. All post offices in Japan have ATMs that accept foreign cash cards. The ATMs at smaller local post offices are only available while the post office is open. However, the central post offices of most big cities have cash machines available 24 hours a day. This is also true of the Kyoto Central Post Office, which has several ATMs ready to use, so you won’t be kept waiting for long. 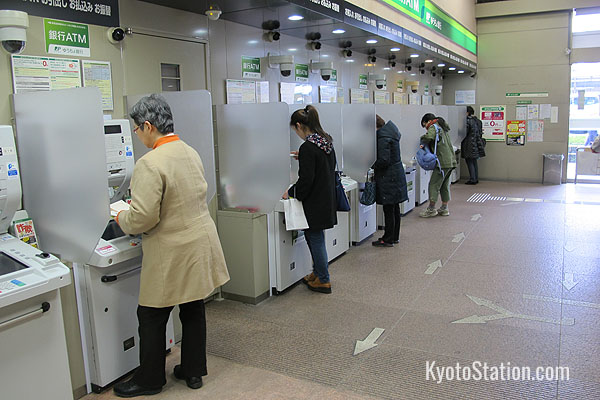 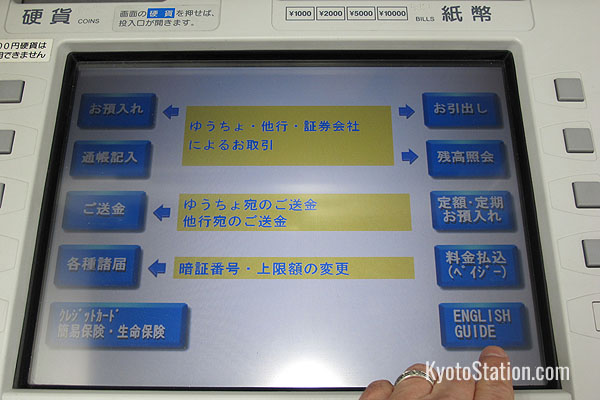 First locate the English button on the touch screen 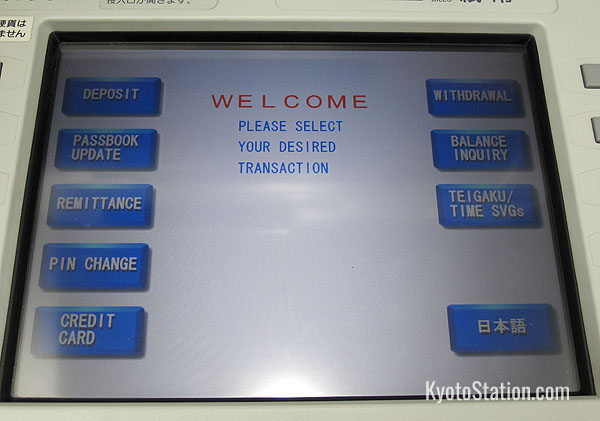 Then you can follow the rest of the instructions in English

Second only to the Post Office for reliability are 7-Eleven ATMs. When you are out and about and you run short of money, just look for a 7-Eleven convenience store. 7-Eleven actually has its own banking service called Seven Bank, and most 7-Eleven convenience stores have ATM machines that accept foreign bank cards. However, although you will see a lot of 7-Eleven kiosks dotted around the Kyoto Station building, these booths are generally too small to have ATMs. There are some larger convenience stores in and around Kyoto Station though, and these do have cash points.

On the north side of the building, as you exit the central ticket gates, you can see a 7-Eleven store on your left, just next to the Cube shopping mall. This store is open from 6:30 – 24:00. 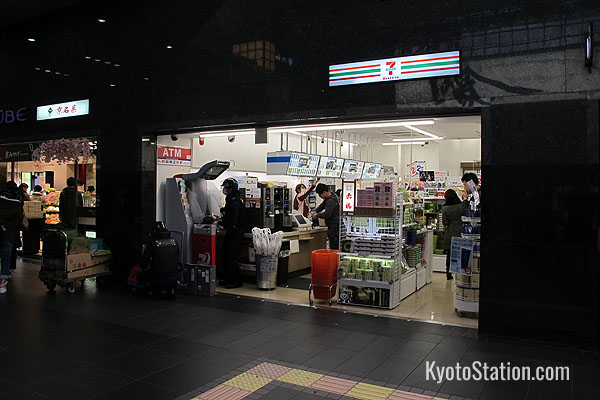 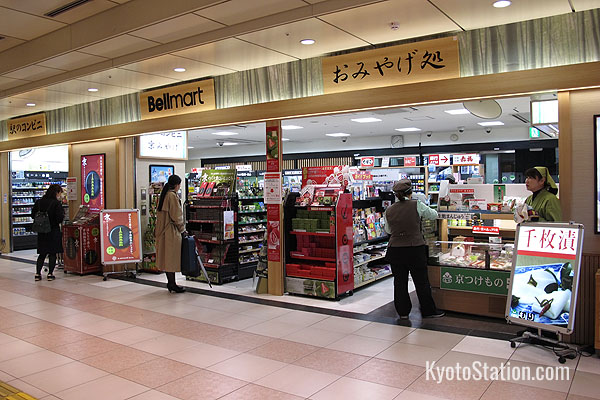 Also on the south side of the station, there is another 7-Eleven store with an ATM at the far west end of the Miyako Michi shopping street. To find it, walk to the western end of Miyako Michi, step outside and follow the station building past Mister Donuts. You will see the 7-Eleven just after the Man in the Moon pub. This 7-Eleven is open 24 hours a day. 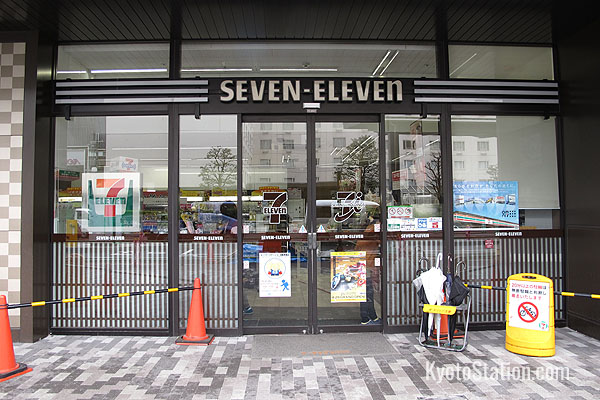 7-Eleven ATMs have English guidance and are easy to use. They accept Visa, Plus, MasterCard, Maestro, Cirrus, UnionPay, American Express, JCB, Discover, and Diners Club International. Here’s how to use them: 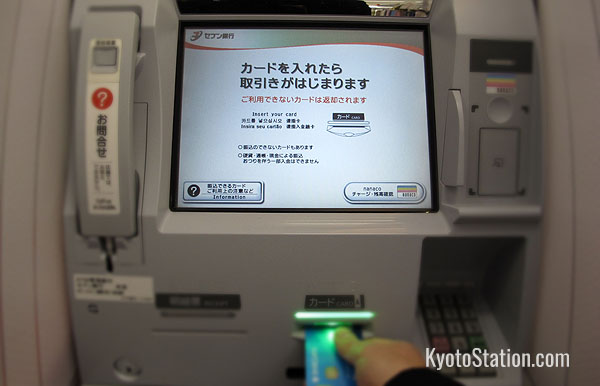 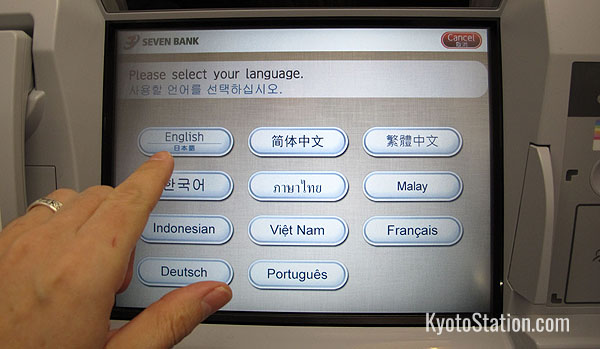 Then select your language 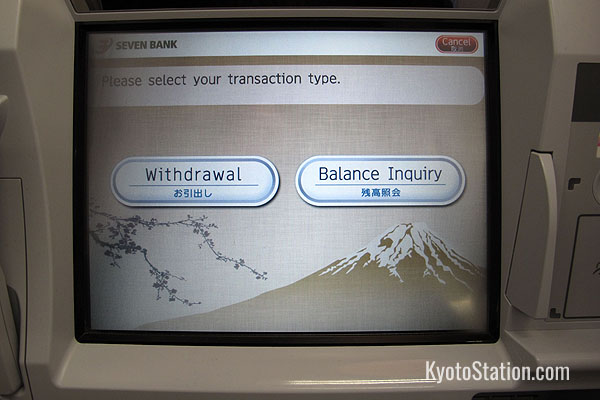 Instructions will then appear in your language

Directly across from Kyoto Station, on the 3rd floor of Kyoto Tower, there is another Seven Bank ATM machine which takes foreign bank cards, and a currency exchange machine. You can find these machines just across from the Tourist Information Center. 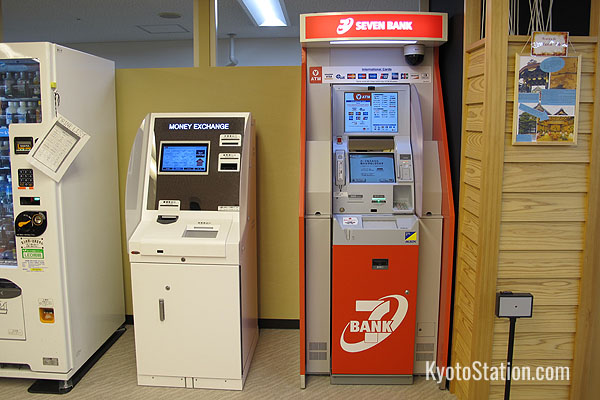 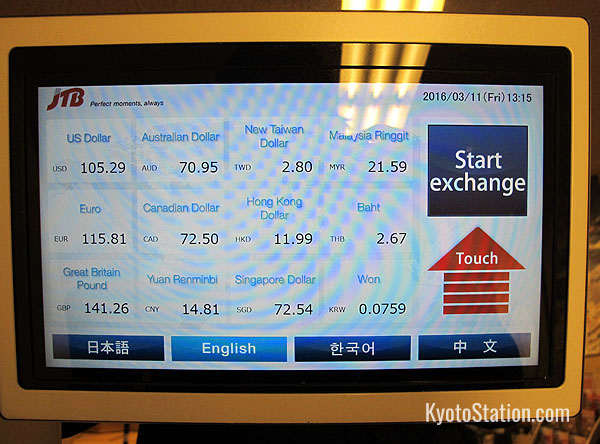 In addition to the currency exchange machine in Kyoto Tower, there is also a World Currency Shop in the Kyoto Station building. You can find it on the 8th floor of the station building on the south side of the “Daikaidan” Grand Stairway. 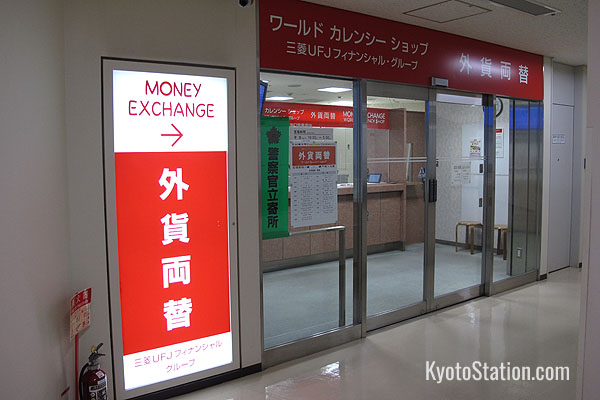 You can also change your currency at the Nippon Travel Agency which is just outside Kyoto Station’s north central ticket gates. 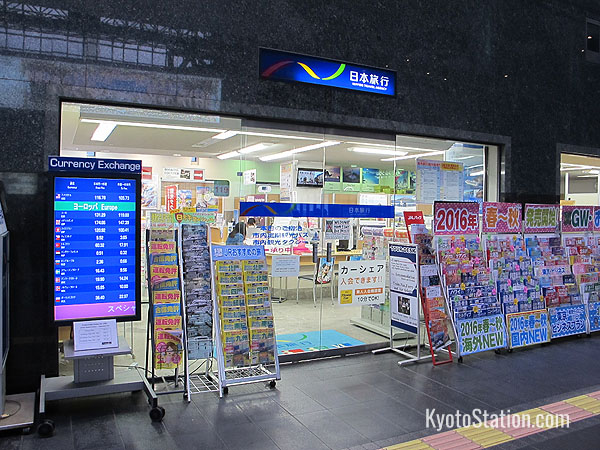