Just ten minutes’ walk from Kyoto Station is the grand complex of Higashi Honganji Temple, one of the great popular centers of Buddhism in Kyoto, and entry to it is completely free. This article is a short guide to its history and main buildings. 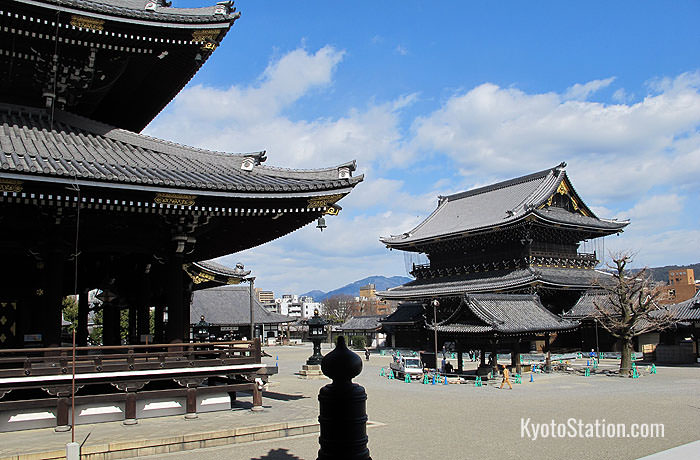 Higashi Honganji, or “Eastern Temple of the First Vow” is one of two head temples of the Jodo Shinshu sect of Pure Land Buddhism, the most popular form of Buddhism in Japan. The other head temple is Nishi Honganji, the western temple, which true to its name is located a few blocks to the west of this one. This Pure Land sect was founded by a monk named Shinran (1173–1263), who simplified Buddhist thought to one essential teaching: all you need to do is repeat the words “namu amida butsu” or “Praise to Amida Buddha”. Shinran believed that Amida Buddha had vowed to save all those who sincerely repeated these words. The winning combination of a simple teaching, with a simple practice made Shinran’s belief system very popular with ordinary working people. After Shinran’s death a Honganji Temple was established to promote his teachings, but this temple was forced to move several times before finally being granted land in Kyoto. In 1602 shortly after Tokugawa Ieyasu became Japan’s Shogun, or military ruler, he encouraged a split within the Honganji sect to prevent it from becoming too powerful. Higashi Honganji was built to the east of the first Honganji temple which is now known as Nishi Honganji. 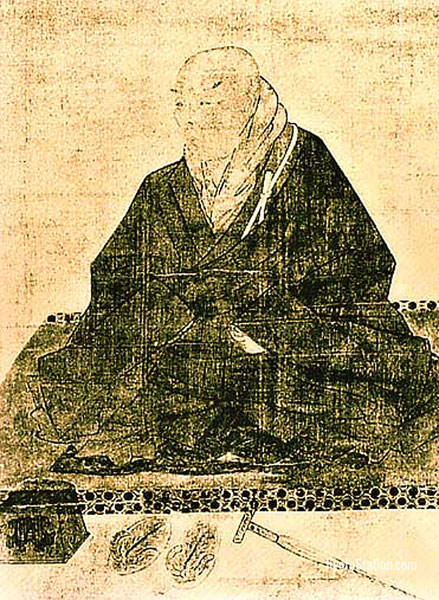 A portrait of the monk Shinran – Public Domain

Originally built in 1604, the Higashi Honganji temple buildings were destroyed four times by fire, the most recent conflagration being in 1864 during a time of political and civil turmoil. Most of the current buildings were rebuilt in the late 19th century and early 20th century. 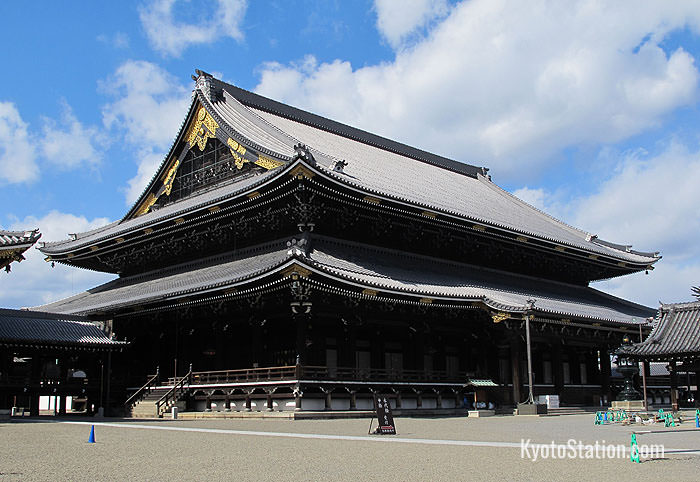 The Goei-do, or Founder’s Hall, is the largest wooden building in Kyoto, and one of the largest in the world. This building was rebuilt in 1895 and is the most important structure in the temple compound. Step inside the massive high ceilinged space, hung with gold chandeliers and supported by 90 pillars and admire the shining sanctuary. Sitting in this quiet, tranquil place on the tatami matted floor you can certainly feel the sanctity. Not surprisingly photography is not permitted. On the main altar before you there is a wooden statue depicting Shinran, the founder of the Jodo Shinshu Sect. Behind Shinran, on the walls is a painting of red and white lotuses by Kōno Bairei, a Meiji era artist who was famous for his realistic depictions of birds and flowers. Above the altar you can see the framed characters 見真, kenshin or “see truth,” written in gold. Kenshin was a posthumous title given to Shinran by the Emperor Meiji and the characters are a copy of the emperor’s own calligraphy. A similar calligraphic dedication is housed in the Founder’s Hall at Nishi Honganji Temple too. Above the sanctuary as a whole runs a carved ranma lattice, covered in gold leaf that shows heavenly figures playing lutes, bells, cymbals and other musical instruments. 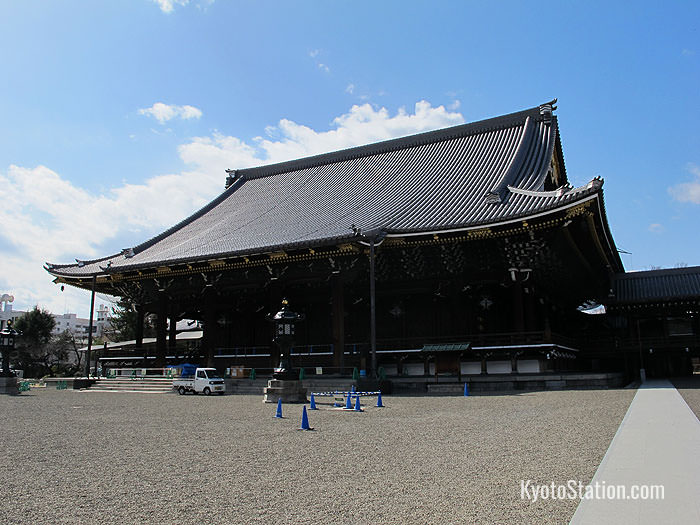 This building was also rebuilt in 1895. On the central altar is enshrined a statue of Amida Buddha. To the right of the statue is a portrait of Prince Shōtoku Taishi (574-622) who was instrumental in bringing Buddhism to Japan. On the left is a portrait of Shinran’s teacher, the monk Honen (1133 –1212). At the time of writing this hall is closed for renovations, so the altar with the Amida Buddha statue and its flanking portraits is temporarily being kept in the Goei-do on the far left of the main altar. 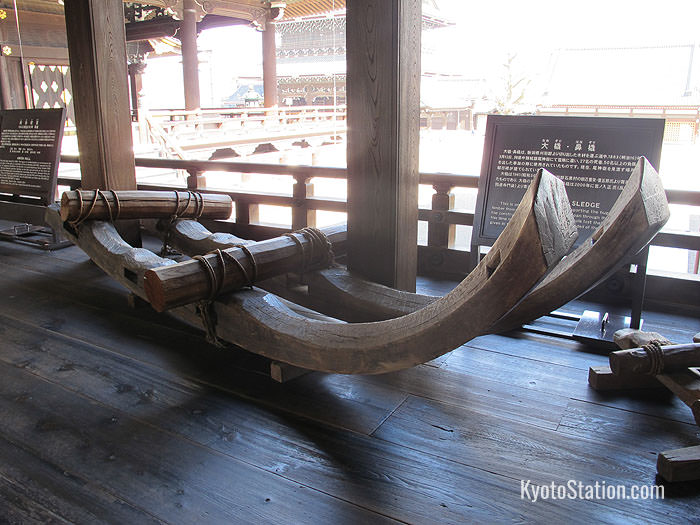 There are some interesting exhibits on the wooden walkway that connects the Founder’s Hall and the Amida Hall. These are all related to the tremendous human investment that went into the rebuilding of the temple in the late 19th century. We can see a large wooden sled, one of many that were used to transport lumber from the mountains for the reconstruction. There is also a diorama that depicts an avalanche overwhelming people on a snowy mountainside who are trying to transport timber for the new temple. Apparently many people lost their lives in this way, and the temple commemorates their sacrifice. Close by in a glass case is an enormous coiled rope that is actually made of human hair. Female devotees of the temple, cut their long hair and sent it to Higashi Honganji, where it was woven into gigantic ropes. These ropes were then used to haul the gigantic beams of the new buildings into place. 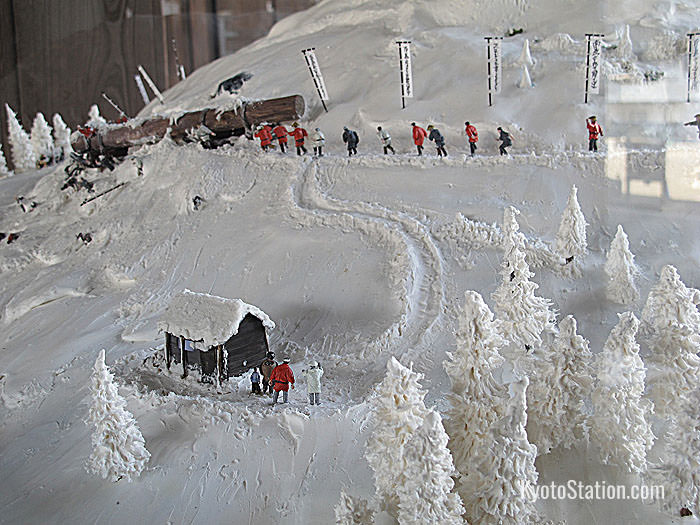 The diorama of lumber being transported from the mountains 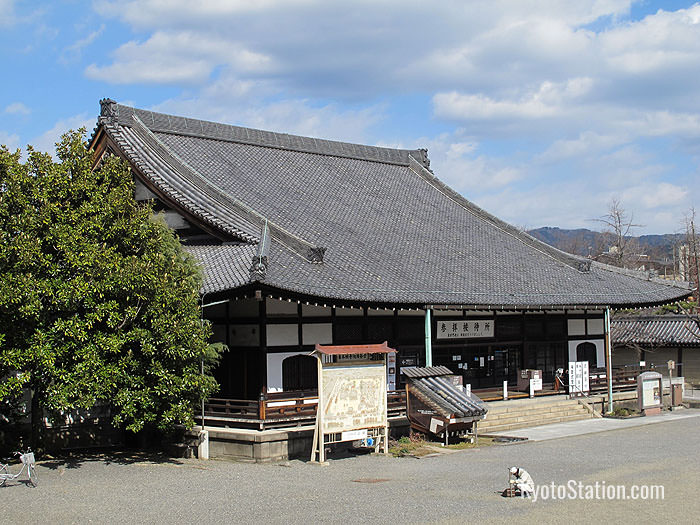 On the north side of the temple grounds is the Sanpai Setto-sho, or reception hall which connects with a gallery and audio visual hall. The gallery holds regular exhibitions on Buddhist related themes. The reception hall was designed by Goichi Takeda the founder of the architecture department at Kyoto University and completed in 1934. The gallery and audio-visual hall are housed in a futuristic building which though mostly underground, is cleverly lit with natural light. It was designed by Shin Takamatsu and completed in 1998. 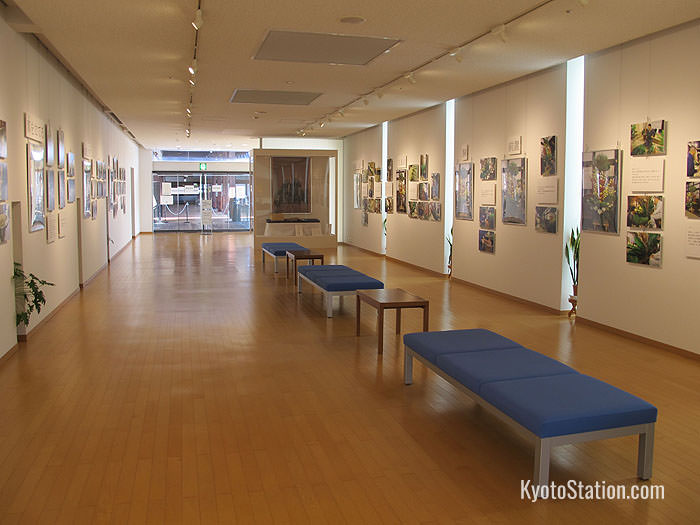 Higashi Honganji’s gates are also of some interest. 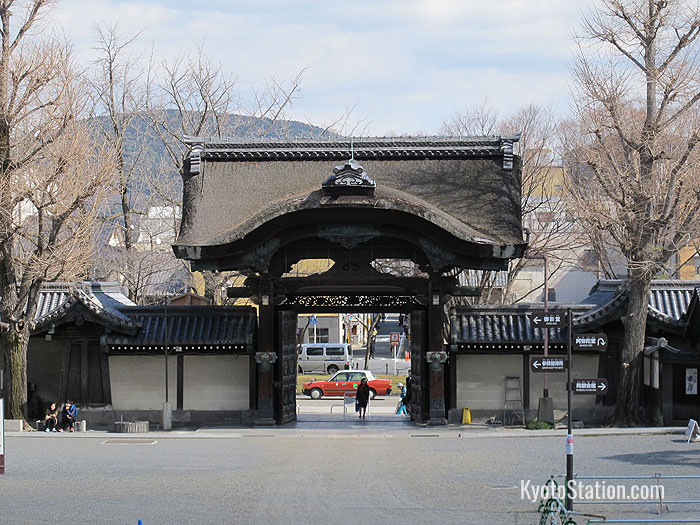 The Amida-do-mon, or Amida Hall Gate is the southernmost entry point. The gate here was originally part of Fushimi Castle but given to the temple by Tokugawa Ieyasu after he had the castle dismantled. Unfortunately, the gate was completely destroyed by the fire of 1864, but the current gate is apparently a faithful reproduction which was completed in 1909. 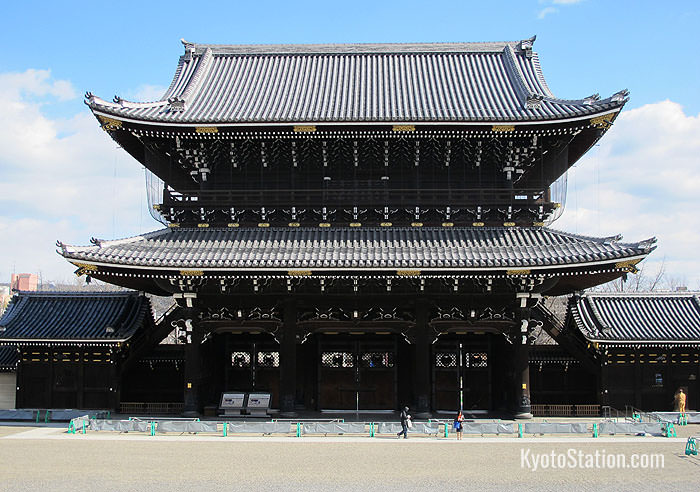 The grandest gate on the grounds is the Goei-do-mon, the Founder’s Hall Gate which was completed in 1911. This gate has two stories and two roofs and is approximately 28 meters (92 feet) in height. 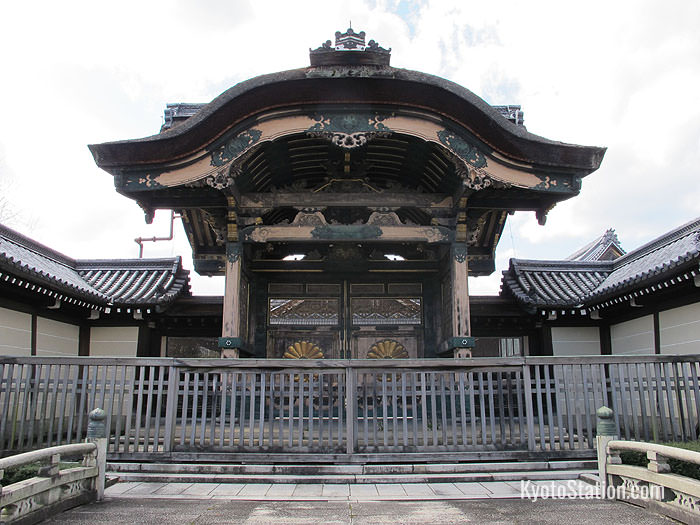 The Imperial Messenger’s Gate, is also called the Chrysanthemum Gate, because it has two imperial chrysanthemum crests on its doors. This gate is normally kept closed, as it is strictly for the use of imperial messengers! The original gate here also came from Fushimi Castle, but was destroyed in 1864. This reconstruction was completed in 1913. 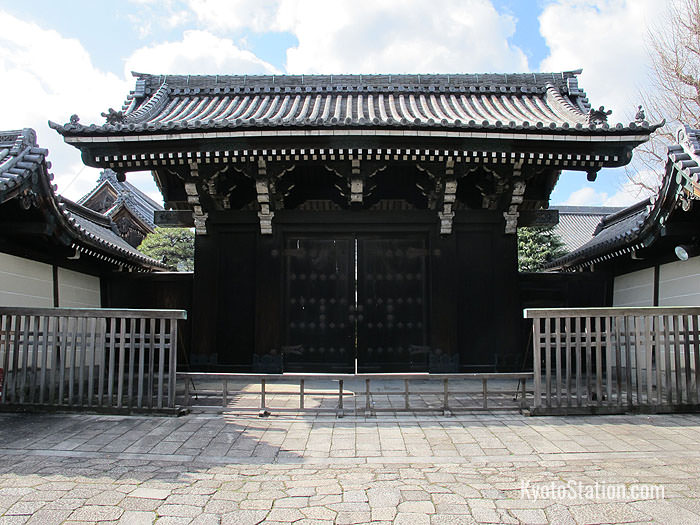 The Genkan-mon, or Formal Entrance Gate is also normally kept closed except for special ceremonies. This gate is the northernmost entrance to the grounds and was completed in 1911. 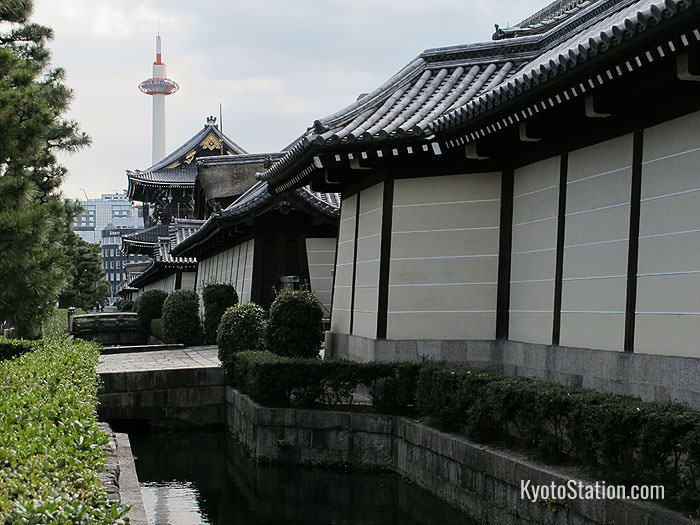 Looking south towards Kyoto Station from the temple’s outer walls

From the north central exit of Kyoto Station head north on Karasuma Street. You will pass both Kyoto Tower and the Yodobashi department store on your left before you see Higashi Honganji Temple on the north side of Shichijo Street. It is easily recognizable by the large sign on its outer walls on which thought provoking words are written in multiple languages: “Now, Life is living you”.