The JR Sagano Line is the part of the JR San-in Main Line that runs between Kyoto Station and Sonobe Station. Along the way it stops at the popular tourist destinations of Nijo, Uzumasa and Saga-Arashiyama. Trains depart from platforms 31, 32 and 33. 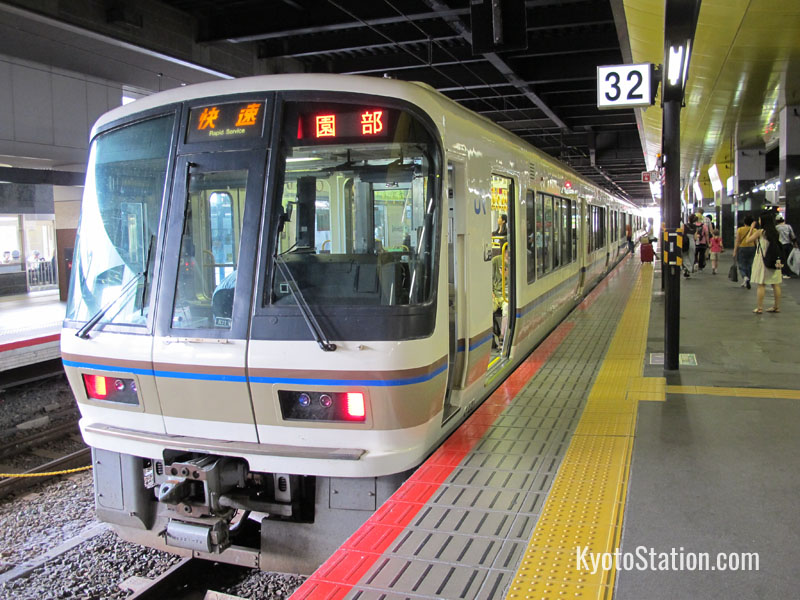 A Rapid train bound for Sonobe on platform 32

This station is a short walk from Nijo Castle, a UNESCO World Heritage Site which dates from 1603. The castle grounds contain several beautiful buildings of historical and architectural interest as well as extensive gardens which are famous for their plum and cherry blossom in the spring and maple leaves in the autumn.

The big attraction at Uzumasa is the Toei Uzumasa Eigamura theme park also known as Toei Kyoto Studio Park. This theme park is also a working film set used to make historical dramas, usually featuring samurai warriors of the Edo era. Among the attractions are sword fighting displays, ninja performances, a maze and a haunted house. It is also possible to dress up in costume and watch the filming of TV dramas and movies. Uzumasa is served by three stations.

This station gives access to the scenic Arashiyama and Sagano area, one of the major tourist attractions in Kyoto. Famous sites in this area include, the Togetsukyo Bridge, Tenryuji Temple, the Arashiyama Monkey Park and the famous bamboo forest. Rickshaw rides and boating on the river are also popular activities.

Nijo Castle can also be accessed via Nijojo-mae Station on the Tozai Subway Line. This station is actually closer to the castle and may be more convenient if you are traveling from the town center.

The Arashiyama and Sagano area is serviced by three stations: JR Saga-Arashiyama Station, Hankyu Arashiyama Station and Keifuku Arashiyama Station. All of these stations are fairly conveniently located, so the line you take will depend on your starting point in the city. If you are coming from central Kyoto, a popular route is to take the Hankyu Line as far as Omiya Station and then transfer to the Keifuku Randen tramline. The ride in an old fashioned trolley car lasts 20 minutes and follows a pleasant scenic route.

To find alternative routes on the city subway or private railways use English language online route finders like Jorudan and Hyperdia. 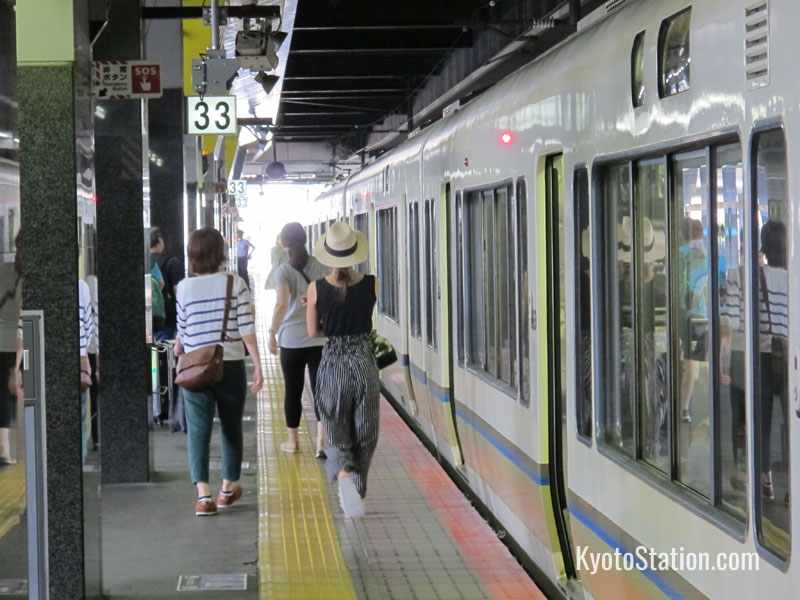 All aboard on platform 33

The JR Sagano Line is serviced by Local and Rapid trains. There are 15 stations on this line between Kyoto and Sonobe. After Sonobe Station the San-in Main line continues on as far as Fukuchiyama. You can download a free bilingual PDF of the JR guide to all the stops along the Sagano (San-in) Line from the official JR website.