Shosei-en is a truly delightful stroll garden just 12 minutes walk from Kyoto Station. Hidden behind large walls, and with an entrance tucked away on a side street, this beautiful garden is very easy to miss. However, beyond those walls are spacious park-like grounds, which include traditional villas, teahouses, and a large pond dotted with islands and bridges. The tranquil garden is so cleverly designed and arranged that once inside its tranquil grounds you could easily forget that you are in the midst of one of Kyoto’s more built up urban areas. If you are in the area, then this charming haven of traditional beauty is definitely worth a visit. Another advantage of this location is that Shosei-en is not as well-known as some of Kyoto’s more famous gardens, so it doesn’t get as crowded with tourists. 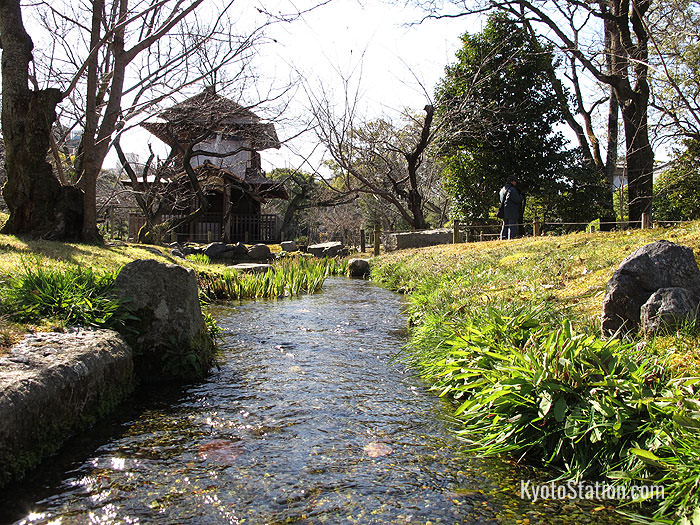 Shosei-en is the detached garden of Higashi Honganji Temple, and has been the property of the temple since 1641 when the ruling Shogun, Tokugawa Iemitsu, granted the temple the land. The estate is also sometimes called “Kikokutei” after a particular kind of orange that grew in the area at that time. A famous Confucian scholar, Ishikawa Jozan (1583-1672), laid out the grounds as a stroll garden for the temple abbot’s private study. Ishikawa Jozan is perhaps best known as a poet and calligrapher, but he also designed the famous garden at Kyoto’s Shisendo Temple. For a long time it was believed that the garden’s history went back even further than that however. A famous Heian era aristocrat named Minamoto no Toru, had a mansion and garden in this area, and people believed that Shosei-en was created on the same site. The likelihood of this story being true has been disputed by historians, but there are many aspects of the garden today that have been influenced by this association. 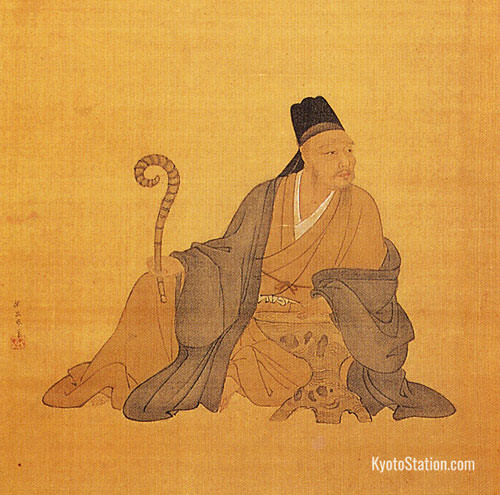 Tragically civil disturbances in 1858, and 1864 resulted in two fires that destroyed all of the original buildings and left the garden a smoldering ruin. The garden and buildings we see today are reconstructions, lovingly recreated in the late 19th century. Below are just a few of the features that you can see in this wonderful garden. 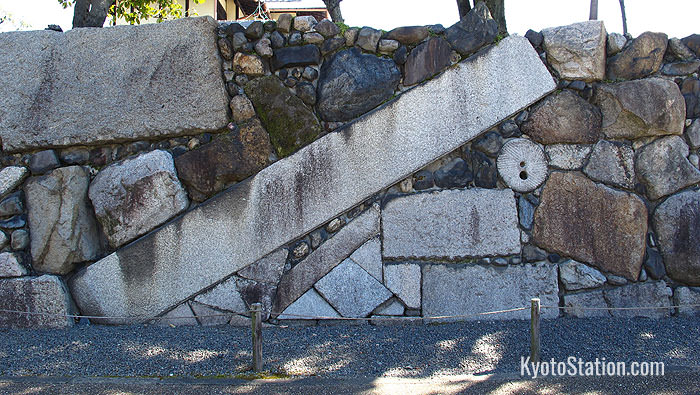 Resembling a gigantic stone jigsaw puzzle, this wall is recycling as high art

After entering at the western entrance, and paying for your ticket, the first thing you will see ahead of you, is this wall. It is beautifully constructed out of borrowed stones from a variety of sources which range from long quarry stones, foundation stones, rocks, tiles and even a round mill stone. 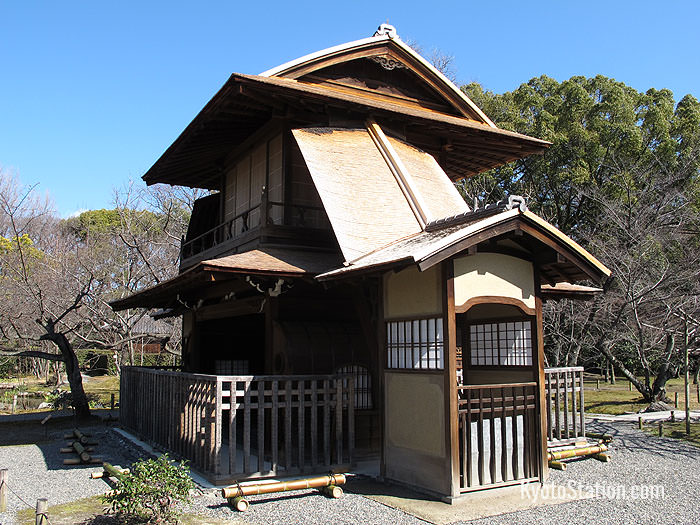 This unusual two story structure is a reconstruction dating from 1892. Unfortunately, visitors are not allowed inside, but apparently the ceiling of the 2nd floor is decorated with the 12 signs of the Chinese zodiac. This is based on an original design by Ishikawa Jozan, who among his other hobbies was a keen astronomer. The name of the gate could be translated as “pavilion beside flowers”, which is appropriate as many cherry trees are planted nearby. There are many different varieties of cherry here which bloom one after the other, so that from late March to mid April, the Bokakaku is bathed in pink and white blooms. 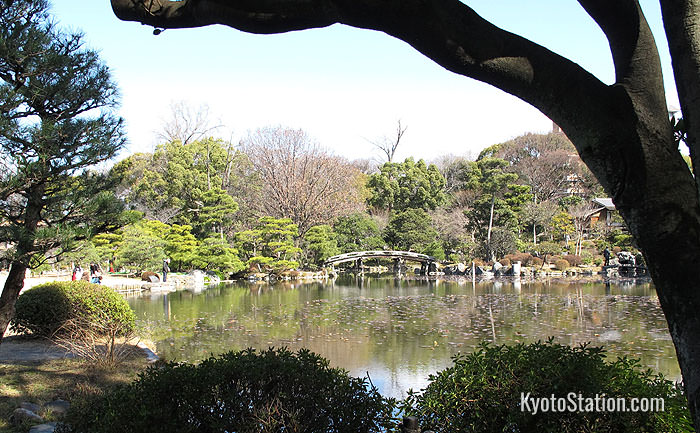 This pond is the main feature of the garden, and in fact covers one sixth of the grounds. When the moon rises above the Higashiyama mountains, it is beautifully reflected in the water. From this comes the name ingetsu-chi which means “Moon Crest Pond”. 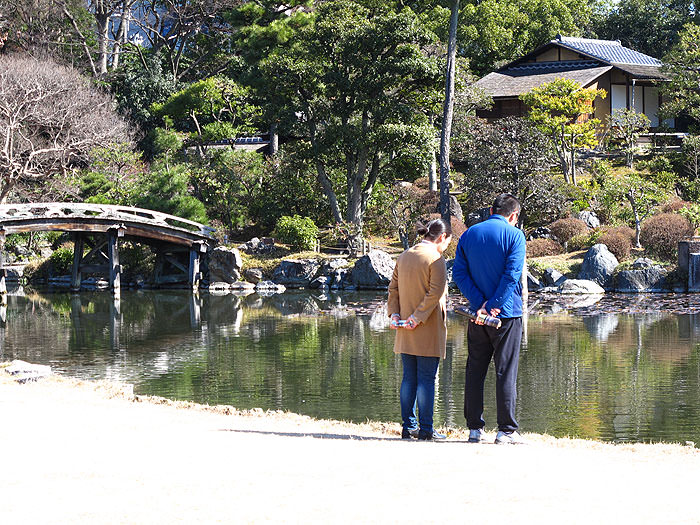 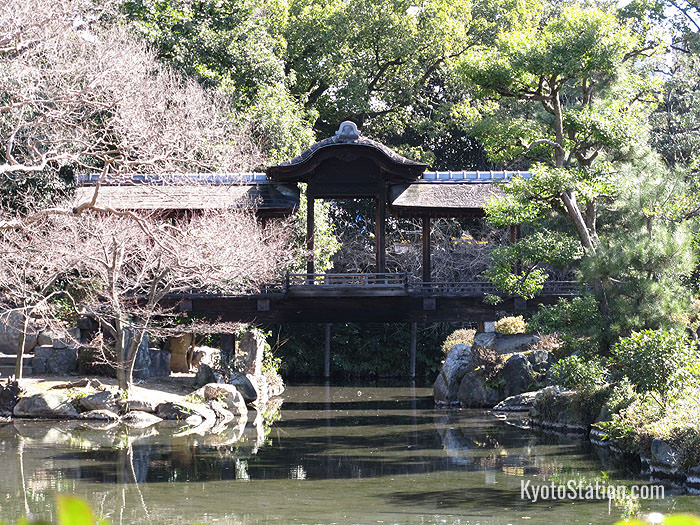 This covered bridge with its cypress bark roof dates from 1884. Before the fire of 1858, the bridge here was quite different, having a bright vermilion balustrade and arched design. In the past the current bridge was hung with golden lanterns to light the way for evening visitors. Presumably this practice was too much of a fire risk to be continued, but though the lanterns have gone, inside the bridge you can still see the hooks. 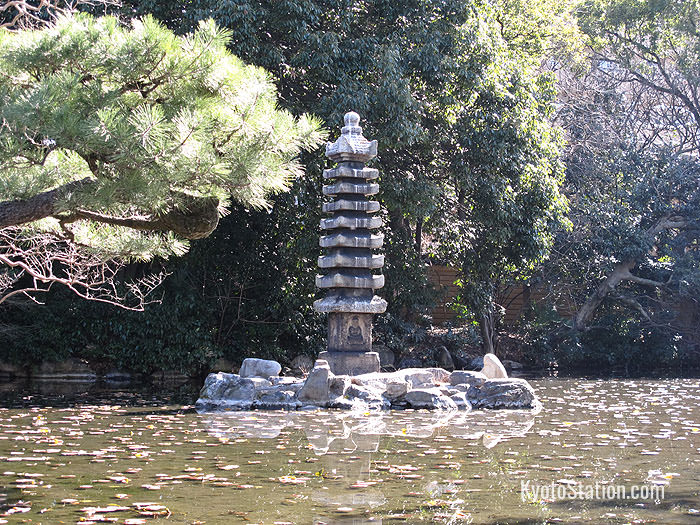 A tribute to a legendary historical figure

This nine level stone tower is a memorial stone to Minamoto no Toru and is said to have been constructed in the Kamakura era, before the Shosei-en garden was created. A lotus design is carved on the very bottom of the tower, and the stone above that has a carved image of the Buddha on each of its four sides. Minamoto no Toru (822 – 895), was the son of Emperor Saga, a prominent statesman and a poet. He is also said to be a model of Hikaru Genji, the main character in the Tale of Genji, the world’s first novel. Toru was a flamboyant figure who famously designed his own garden to resemble the north-eastern sea coast. The sight of fires used by salt makers on the sea shore were said to be a source of poetic inspiration, so for his own amusement Toru had sea water brought to his garden. He would then have it boiled down for salt. Because of the Shosei-en’s association with Toru, there are some features around the garden that reflect this story, including the “shiogama no chozu-bachi,” a water basin for salt water, and the “shiogama” a stone covered pit, that was meant to look like a salt oven. 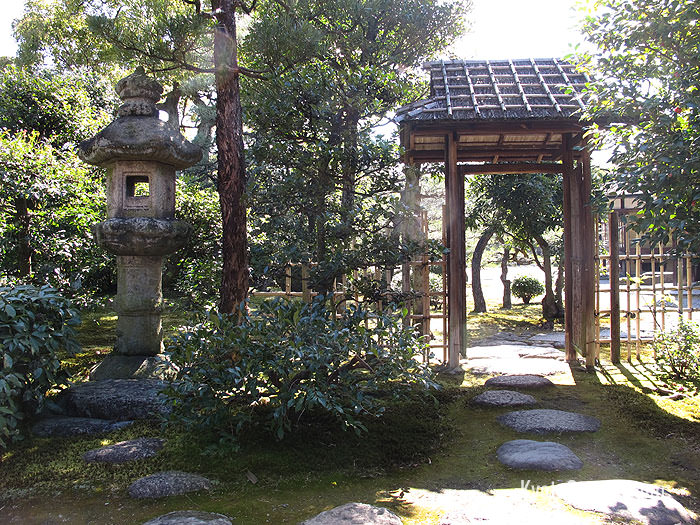 Simple is best – the teahouse aesthetic

This gate and stepping stone pathway leads to the Roan teahouse. The bamboo fencing with its cedar bark roof, is a perfect example of the teahouse aesthetic of simple beauty. Beside it is the Kasuga Lantern, which dates from the early Edo era, and is notable for the design of its hexagonal roof, which is actually shaped to resemble piled up fallen snow. 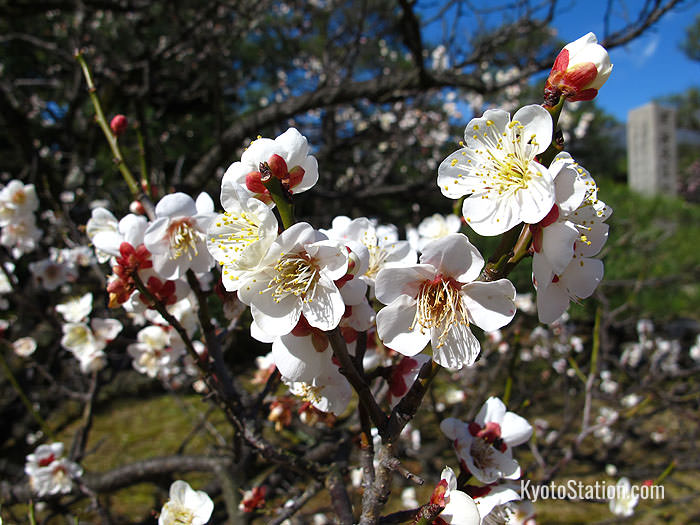 Unlike cherry blossom which has no scent, plum blossom has a sweet aroma reminiscent of wine

Planted with a rich array of trees and flowers the Shosei-en is a colorful garden in all seasons. Particularly notable are the spring cherry blossoms, purple wisteria in May, and maple leaves in the autumn. Even in February, visitors are delighted by the flowering plum orchard. These twenty trees with red and white flowers continue to bloom into mid March.

The entrance to Shosei-en is a 12 minute walk from Kyoto Station on Ainomachi Street. To find it go north on Karasuma Street passing Kyoto Tower and the Yodobashi department store on your left. When you get to the intersection with Shichijo Street turn right. Ainomachi Street is the third street on your left running north from Shichijo. 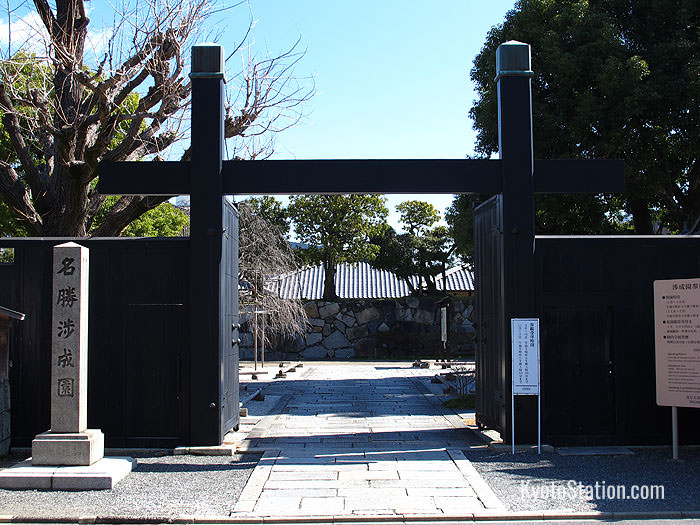 After buying your entry ticket you will be given a large full color pictorial booklet with pictures of the garden’s main features. Though the text of the booklet is mostly in Japanese, the beautifully produced photographic record makes for a very nice souvenir, and that alone is worth the price of admission.