Toji Temple, is a UNESCO World Heritage Site of immense historical significance, just 15 minutes’ walk south of Kyoto Station. Especially famous for its five story pagoda, Toji’s awe inspiring buildings and beautiful Buddhist statuary make it an essential stop when touring Kyoto. In addition, on the 21st of each month there is a massive flea market here, which transforms the grounds from a peaceful sanctuary to a lively and colorful festival of commerce and trade. In this article we introduce the temple’s history, its main buildings and explore that lively market. 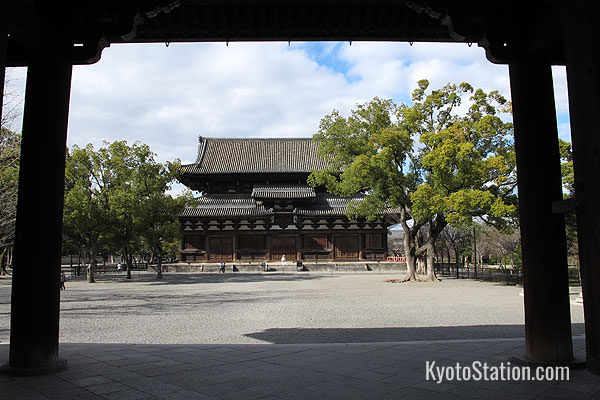 Toji is one of Kyoto’s oldest temples. It was founded as a guardian temple for the city in 796 just two years after Kyoto was established as the imperial capital. The temple was one of two that were built to protect the city from negative spiritual energies. Toji means ”East Temple” because it was built on the east side of the main city entrance. Originally, there was also a massive gate called the Rashomon, and a “West Temple,” called Saiji, on the other side of that gate. Sadly however, the gate and Saiji Temple, have both long since disappeared. 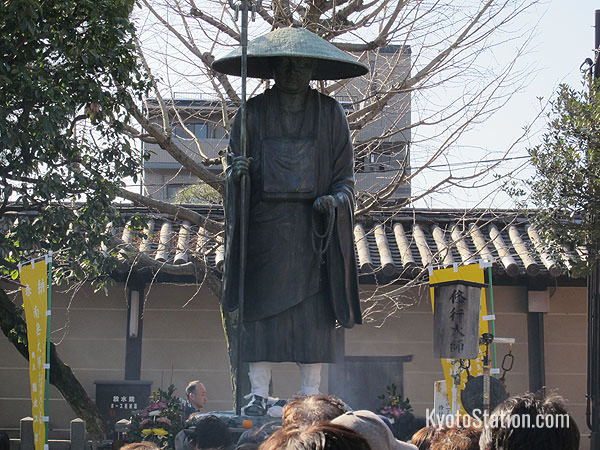 A statue of the monk Kukai at Toji Temple

In 823 the Emperor Saga put the monk Kukai in charge of Toji Temple. Kukai (774–835), also known as Kobo Daishi, is a very important figure in Japanese history, and in Kyoto’s history in particular. Kukai was the founder of the Shingon sect of Buddhism. He had studied in China, and brought back not only new spiritual and cultural teachings, but also a knack for civil engineering. He made Toji temple the headquarters of the Shingon sect and added several buildings to the grounds, including the famous pagoda. 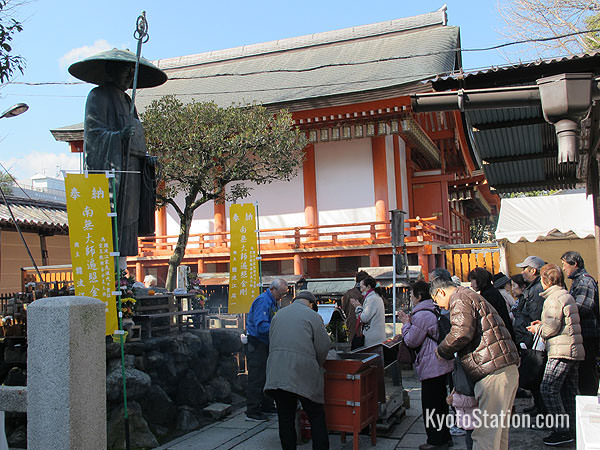 Temple goers pay their respects at the statue of Kukai

A Buddhist saint, Kukai is a legendary figure still revered by followers of the Shingon sect. There is even a story that he never died. Rather like the British legend of King Arthur, he is said to be deep inside a mountain in Wakayama province, still meditating and awaiting the coming of the next Buddha.

Toji’s most important buildings are arranged in a line between the southern and northern gates of temple grounds, with other minor buildings and the pagoda at the sides. Though these buildings have been repeatedly damaged or destroyed by earthquakes and fires, they have always been rebuilt with the original layout. So although most of the current buildings were rebuilt in the 17th century, they still stand in their original locations, just as they did 12 centuries ago. 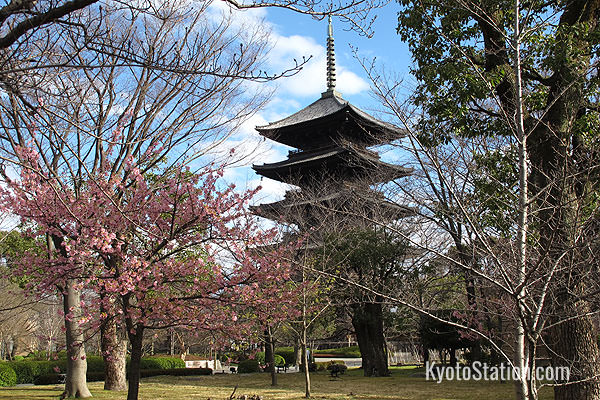 The Pagoda viewed through the temple garden

Some of the buildings are free to enter, but others such as the Kondo and Kodo require a ticket. Entry to the ground floor of the pagoda is sometimes possible depending on the season. Let’s take a look at the main structures. 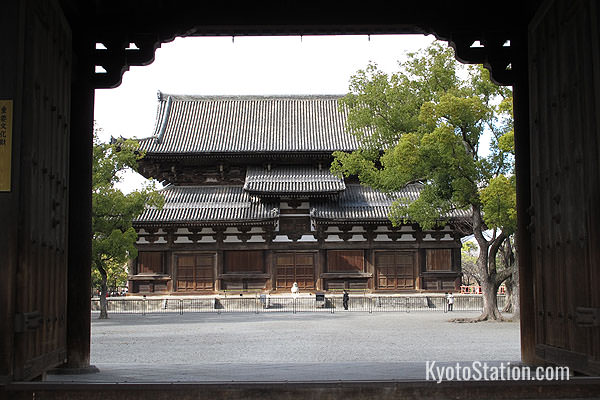 The Kondo or Main Hall viewed from the Minami Daimon, southern gate

The first thing you see after entering the southern gate is the Kondo, or Main Hall. This is Toji’s largest building. Originally built in the 8th century, it was destroyed by fire in 1486, and then reconstructed in Momoyama period style in 1603. Inside the Kondo are three great shining statues representing Yakushi Nyorai, the merciful Buddha of Medicine, and his attendants Nikko Bosatsu and Gakko Bosatsu. Bosatsu are spiritual beings dedicated to the enlightenment of all humanity. Many people come here to pray for both their spiritual and physical health. 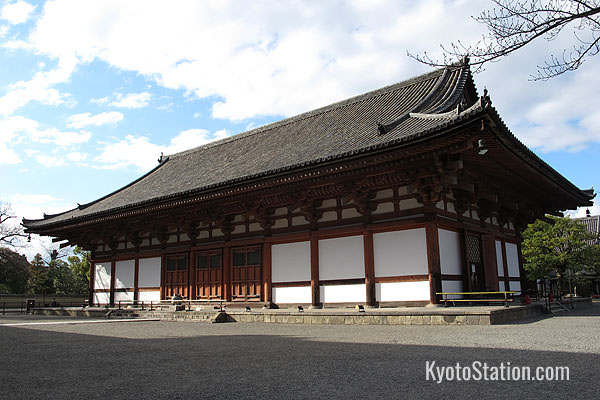 The Kodo or Lecture Hall

The Kodo, or Lecture Hall, stands directly behind the Kondo Main Hall. It was built by Kukai in 835. This building was destroyed with the Kondo in the fire of 1486 but rebuilt in 1491 according to the original style. Inside are crowded 21 statues of buddhas, bosatsu, and fierce guardian deities. These are all arranged in a three dimensional mandala that is said to represent the spiritual universe. 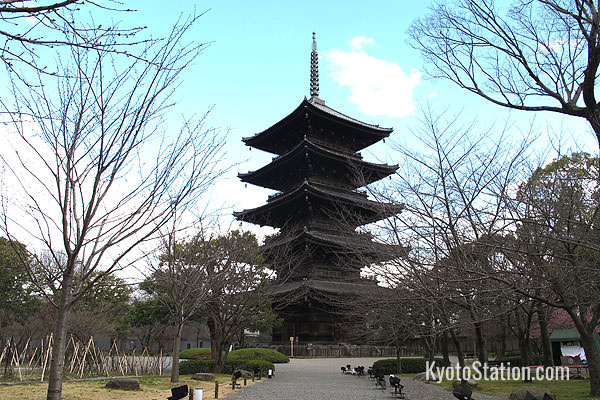 In the south east corner of the grounds stands the famous five storied pagoda, called Goju-no-to. At 55 meters high it was for many centuries the tallest building in Kyoto until Kyoto Tower was built in 1964. Even so, it still holds the record as the tallest wooden tower in Japan, and its familiar outline on the skyline of the city has made it a symbol of Kyoto. Though the pagoda is cleverly constructed to be earthquake proof, its wooden timbers are prone to fire. Goju-no-to has actually burned down four times in its history, and the last time it was rebuilt was in 1644. The ground floor of the pagoda is sometimes opened to the public, depending on the season. Inside are four statues of the Buddha facing the four cardinal directions, and many colorful wall paintings. 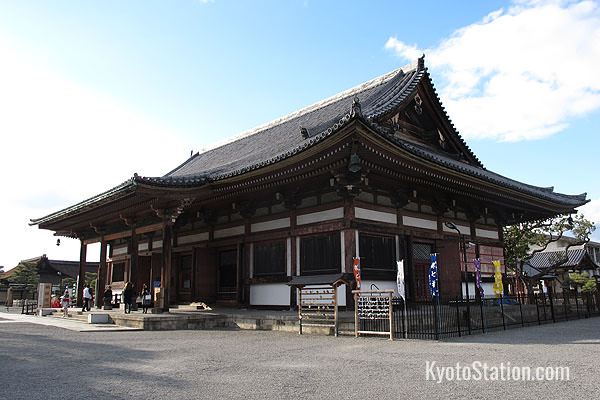 This building stands behind the Kodo and is free to enter. Originally the Jikido was the temple refectory. Today you can buy souvenirs and store your baggage here. Like many of the other buildings, the Jikido has burned down twice in its history and the current building was erected in 1930. 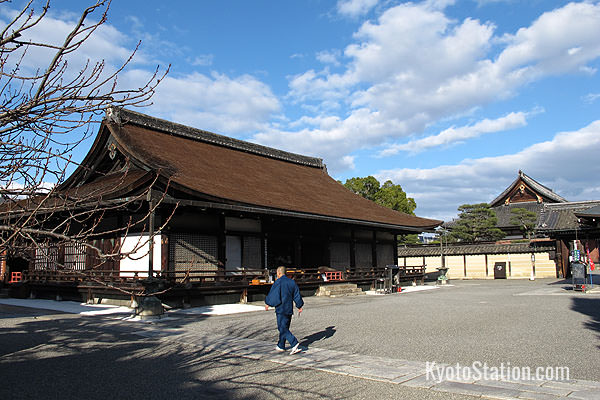 The Miedo is the former residence of Kukai

The Miedo building dates from 1380 and is located in a separate walled area to the west of the Kodo and Jikido. This building is free to enter. It was formerly Kukai’s house, and a painted statue of him is kept on an altar inside. The statue is a designated National Treasure, but unless you visit at the right time you won’t see it. Most days the statue is kept locked away except for the following times:

1. At 6:00 to 7:30 every morning when the statue is served a ceremonial breakfast.
2. During the temple’s opening hours on the 21st of each month. This is the anniversary of Kukai’s passing.
3. During other special memorial services scheduled throughout the year. 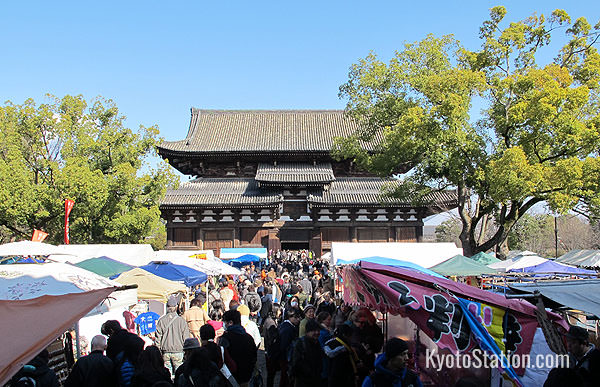 On the 21st day of each month the temple grounds are transformed into a small market town with hundreds of stalls and their colorful canopies. The market is actually part of a monthly religious festival to commemorate Kukai’s passing, as he died on the 21st day of the third month in 835. Because of this association, the flea market is named “Kobo-san” or “Kobo-ichi”, after Kukai’s posthumous name, Kobo Daishi. Among the market traders and keen-eyed bargain hunters, you may also see and hear people and monks praying and chanting at various locations around the grounds. It is a heady mix of the sacred and mundane! 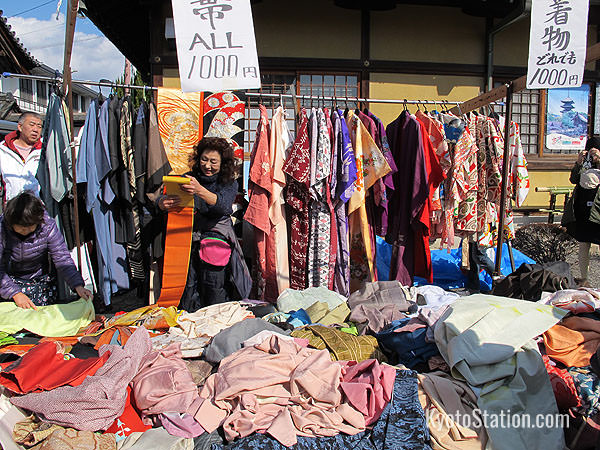 Among the second hand clothes stalls you might find some kimonos

The market is a good place to find bargain souvenirs, but even if you don’t buy anything, just exploring the incredible variety is a unique experience. Dive in among the stalls and bustling crowds and see what you can find. 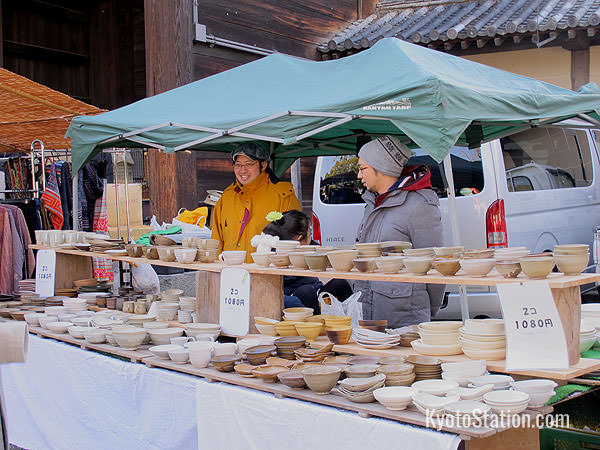 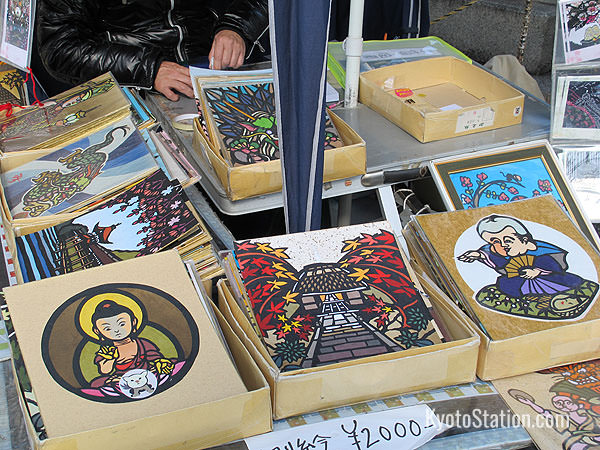 Pretty much anything you can imagine is on sale here: antiques, artwork, pottery, lacquer-ware, calligraphy materials, tea ceremony utensils, cutlery, curios, plants, flowers and bonsai trees. And if the price seems a little too high, don’t be afraid to indulge in some light haggling. 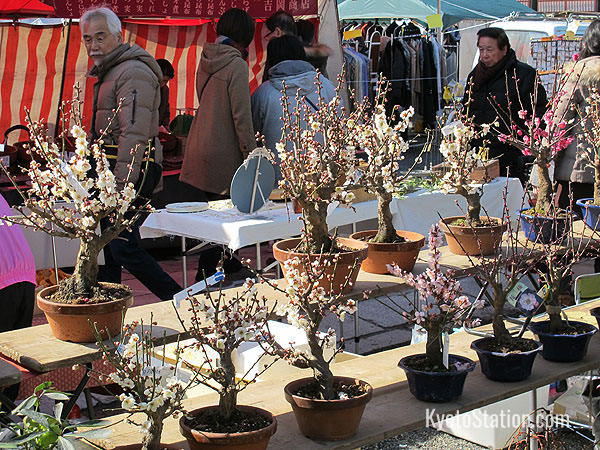 And when you need an energy boost, you can grab a snack at one of the food and drink stalls. 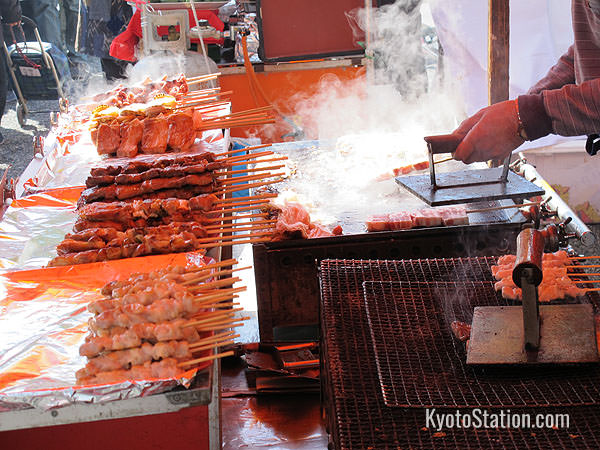 For a quick bite to eat why not try the yakitori (grilled chicken) stand?

The To-ji Temple flea market is one of Kyoto’s three major markets. The other two are the handicraft market at Chion-ji Temple that takes place every month on the 15th, and the market at Kitano Tenmangu Shrine on the 25th. There is also a smaller antiques market at Toji Temple, called “Garakuta-ichi”, on the first Sunday of each month. 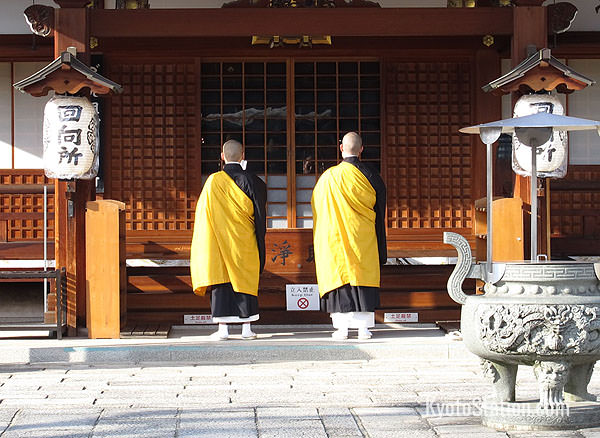 Monks at prayer at Toji Temple

Toji Temple is a 15 minute walk, south-west of Kyoto Station close by the intersection of Omiya and Kujo Street. If you are coming from further away, the nearest stations are Toji Station on the Kintetsu Kyoto Line, and Kujo Station on the Karasuma Subway Line.

Entry to the main grounds and the market is free, but entry to the Kondo and Kodo buildings requires a ticket. Depending on the time of year, the cost of an adult ticket can vary between 500 – 800 yen. This is because sometimes entry to other buildings, such as the ground floor of the pagoda, is included in the ticket. Entry to the Miedo and Jikido buildings is free all year round.

Photography is not permitted inside the Kondo, Kodo and Pagoda.