Kyoto is Japan’s most elegant city, where its cultural traditions are best preserved. Here we expect to find wooden townhouses on lantern lit lanes, ancient shrines and temples, stately palaces and meditative gardens. So a first time visitor to Kyoto might well be surprised by the sight of the brightly painted red and white tower that stands directly across from Kyoto Station’s north central exit. 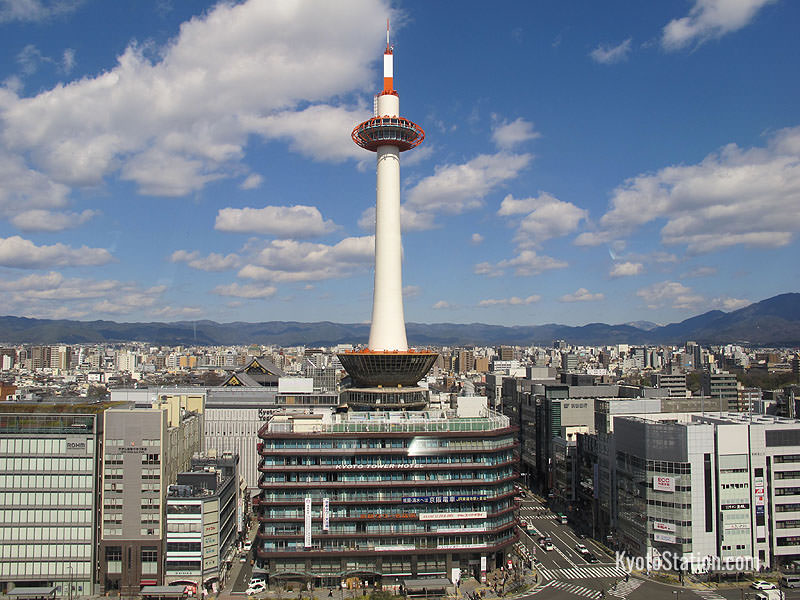 A cheerful beacon of 1960’s optimism, Kyoto Tower stands at 131 meters high from its base to the tip of its spire, and it is the tallest structure in Kyoto. As such it dominates the skyline and can be spotted from many of the sightseeing locations around the city. For a little over 50 years this curious structure has split opinion between those who see it as a symbol of modern Kyoto, and others who see it as a tacky and inappropriate folly.

In this article we will introduce its main facilities and take a look at the history of how and why it came to be built.

Finding Your Way Around

Within Kyoto Tower are a puzzling array of facilities and businesses, and it can be hard to find your way around. It is important to realize that the structure is divided into two parts. At its base is the Kyoto Tower Building, a simple nine story block that holds restaurants, shops, a hotel, a tourist information center and a public spa. This building acts as a pedestal for the tower proper which soars above it for another 100 meters. Inside the tower itself are the observation levels. To reach these levels you must first take the elevator up to the 11th floor, which is the transfer point between the building and the tower. You will then take another elevator to the upper levels. On Level 3 is the Sky Lounge bar and on Level 5 is the Observation Deck. The Observation Deck is open to visitors 365 days a year, and offers sweeping views over the entire city and most of its major landmarks. Below is a guide to the tower’s most important attractions. 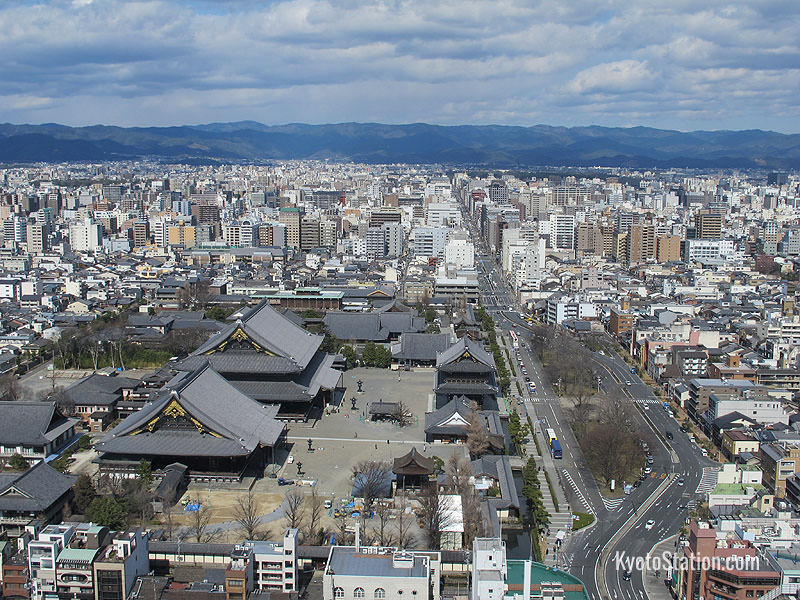 The view from the Observation Deck at Kyoto Tower

This is the major draw for the tower and is definitely worth a visit. The Observation Deck stands 100 meters high and on a clear day gives you a fantastic panoramic view over the entire city. Tickets for the observation deck can be bought at a booth on the 1st floor. You can then take an elevator to the 11th floor and there transfer to another elevator which takes you up to the Observation Deck. The deck is spacious and has telescopes dotted around from which you can view most of the major sites in Kyoto. Previously there were many games machines here which created a rather noisy and tacky atmosphere for visitors, but the deck has been renovated in recent years and happily the games machines have vanished. The deck now has a far more elegant interior with tranquil music playing in the background and even a mini-shrine at which visitors can make a special tower top wish. 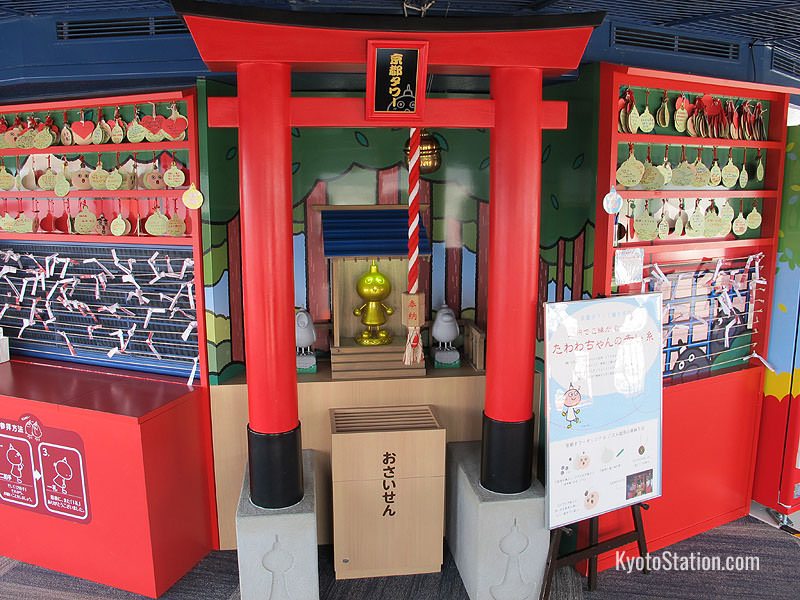 The observation deck’s shrine featuring the tower mascot in gold

The first floor of the tower building is dominated by a bustling market of souvenir shops which can be a little overwhelming. A ticket booth for the tower top Observation Deck is located by the main entrance, on the south eastern corner of the building. 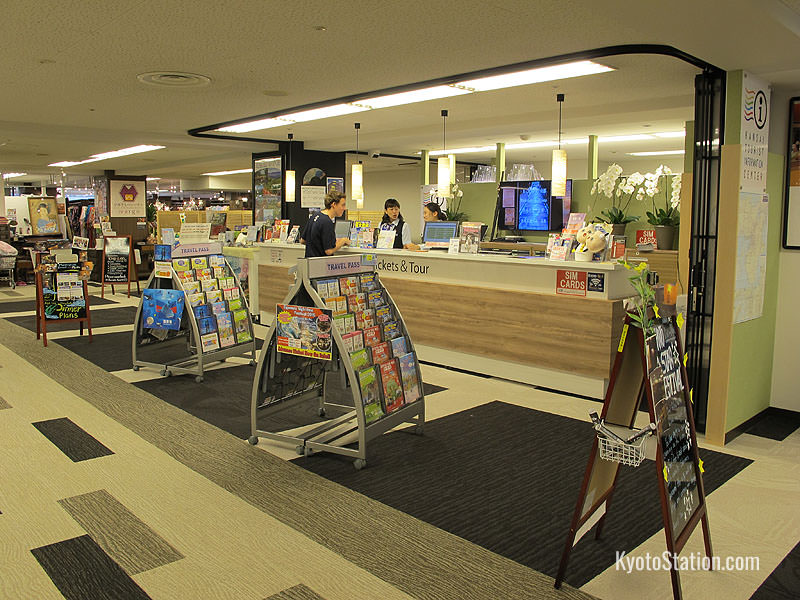 KTIC opened in 2015 and is staffed by multilingual staff who can help foreign travelers with their enquiries. The center has free maps and sightseeing information for not only Kyoto but all across Japan. Staff here can make reservations for tours, hotels, chartered taxis and even kabuki theater shows. Various discount transit passes are also available. 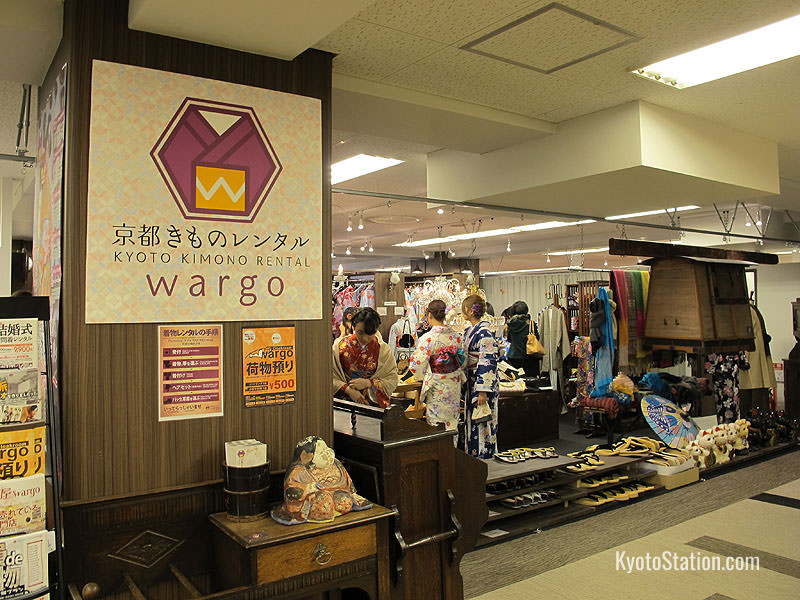 Close by the center is a kimono rental shop, and close to that is a photo studio, so you can have a professional photograph taken after getting dressed up in traditional Japanese finery. On the same floor you can find an ATM cash dispenser which works for most major credit cards and a currency exchange machine. Free Wi-Fi is also available on this floor. 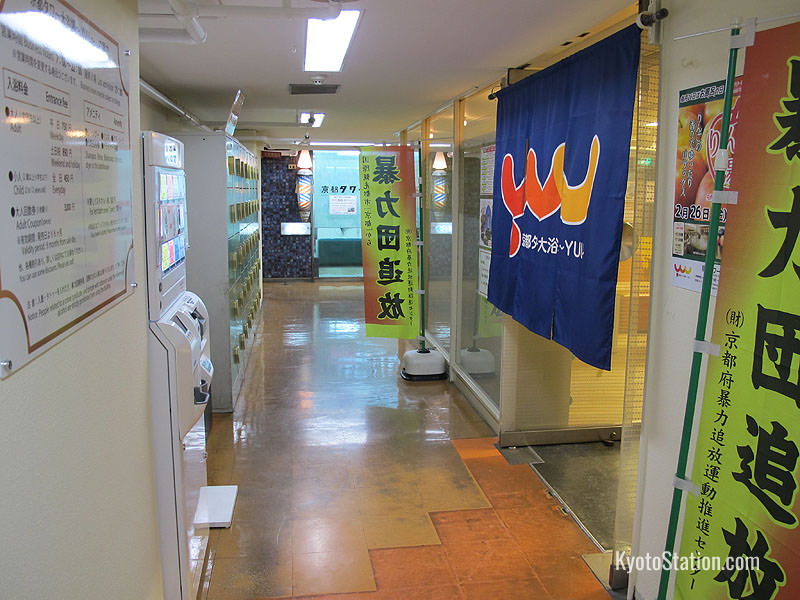 The entrance to the Spa

The spa, “Kyoto Tower Daiyokujo Yuu”, is located in the third basement level of the Kyoto Tower Building. This is a typical Japanese sento style public bath. A ticket vending machine is located outside the spa entrance. Buy your ticket here and then hand it over to the staff inside. You can then leave your clothes in a locker, and enter the bathing area. Remember to follow Japanese bathing etiquette by rinsing off first, then taking a soak in the bath, and after that washing yourself with soap outside of the bath. This spa is a little pricey as tickets for adults are priced at 700 yen on weekdays and 750 yen at the weekend. If you are staying in the Kyoto Tower Hotel however, you can pay a special fee of just 400 yen. Rental towels are also available for 100 yen. Shampoo, conditioner, body wash and hair dryers are all supplied for free.

There are three restaurants in the first basement level (B1) and two on the 3rd floor of the Kyoto Tower Building. On Tower Observation Level 3 is the Sky Lounge Café and Bar. The Kyoto Tower Hotel occupies floors 5 – 9 with its reception on the 8th floor. See our articles Dining in Kyoto Tower and Kyoto Tower Hotel for more details.

The History of Kyoto Tower

It is a pity that among Kyoto Tower’s many facilities, it does not have a museum dedicated to its own history. At the very least it would answer the question: who built this lofty space age steeple, and why? In fact the tower’s completion in 1964 marked a turning point in Kyoto’s history, and one that for better or worse ushered in a wave of modernization. Significantly the same year saw Tokyo host the Olympic Games, and the Tokaido Shinkansen Line was completed, bringing Kyoto’s first high speed train link with Tokyo. 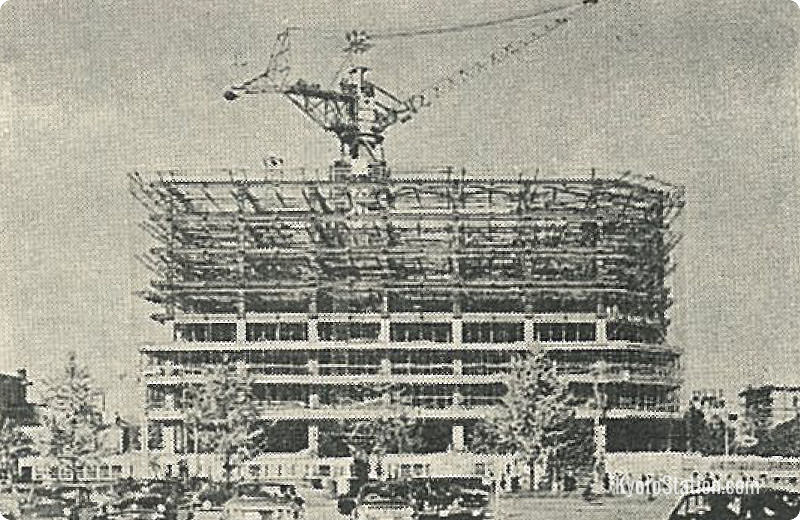 Construction of the Kyoto Tower building

The land on which Kyoto Tower now stands was formally the site of Kyoto Central Post Office which moved to its current location, just north-west of Kyoto Station, in 1961. The decision to move the Post Office was made back in 1953 however, and at that time talk began among civic and business leaders about how best to utilize this newly opened space at the entrance to the city. Under the sponsorship of Kyoto’s Chamber of Commerce and Industry it was decided to set up a company to oversee the construction of a building appropriate to the area that would act as center of culture and industry and encourage tourism. To begin with there were no plans for a tower.

Initial plans for the new “Center Building” were drawn up by modernist architect, Mamoru Yamada, who also designed Tokyo’s famous Nippon Budokan arena. At that time, strict municipal construction regulations limited the height of all buildings to 31 meters, so Yamada designed a 9 story building to stand at exactly 31 meters high. On top of this he originally planned to build a relatively modest viewing platform or radio tower. However, one of the business leaders directing the project was inspired by a view of the Yokohama Marine Tower, and he encouraged Yamada to think big. The architect then theorized that a tower could be built on top of the Center Building which he envisioned as a lighthouse casting its light upon the waves of tile roofed machiya townhouses below. To get around the height regulations, the tower could be labelled as a separate “rooftop structure” rather than as part of the building itself. This crafty loophole made construction of the tower legally possible, but was it technically possible? Could the base building carry the weight of a 100 meter high 800 ton tower? Yamada called on Kyoto University’s professor of engineering, Makoto Tanahashi to find out, and Tanahashi said “yes”. It was Tanahashi that worked on the structural engineering that made Yamada’s dreams a reality. Because a simple steel frame lattice structure, like that of many other towers, was deemed too unrefined for Kyoto, a white painted cylindrical design was adopted. Tanahashi’s tower consists of lightweight stacked steel rings with steel cladding on the outside, and is designed to withstand typhoons and earthquakes of the highest magnitude. Though, to many onlookers the tower may resemble a futuristic rocketship, it is said that Tanahashi actually shaped it to resemble a traditional Japanese Buddhist candle, which in fact it very much does. 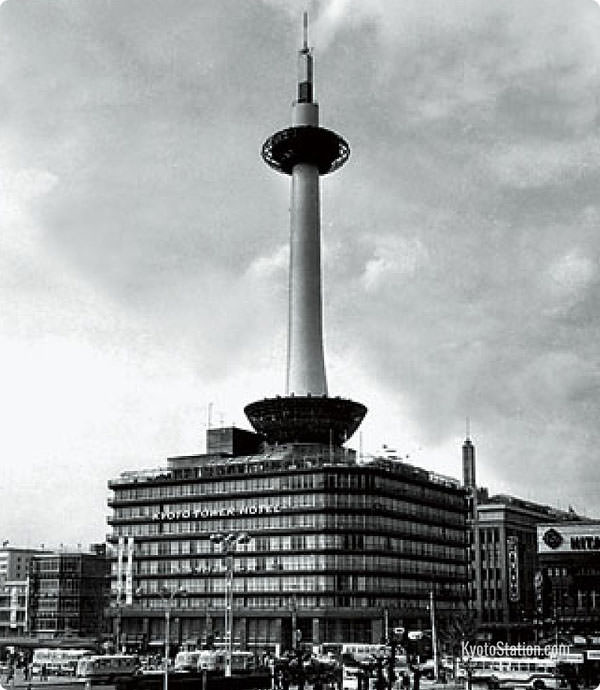 When plans for the tower were made public, they immediately met with fierce opposition. Local academics and cultural experts objected that the new tower would destroy the city’s historic scenic harmony. The design team’s efforts to create an elegant modern structure were widely derided as a vulgar and out of keeping with Kyoto’s past. Political and business leaders on the other hand, saw only economic opportunity in the new plans and countered that though Kyoto was Japan’s ancient cultural capital, it was not a Heian era graveyard. For the city to grow and flourish, such projects were necessary. Public opinion was sharply divided between these two opposing views, and to some extent it still is. The final decision lay with the city’s political elite however, and they pressed on regardless. On December 28th 1964, one year and ten months after building began, Kyoto Tower was opened to the public and within the space of year it had received over a million visitors. In the half century that has passed since the tower was built, most people have become accustomed to its rather brash and cheeky presence on the skyline. It has also been pointed out that the Eiffel Tower, when first built, also met with similar Parisian opposition, and who remembers that now? However, Mamoru Yamada and Makoto Tanahashi could never have imagined back in the 1960s, how their bold creation would initiate a wave of modernization that would see much of the city’s traditional wooden townhouses replaced by concrete blocks. Though their lighthouse still stands proud over the skyline, the waves of tiled rooftops have almost disappeared. 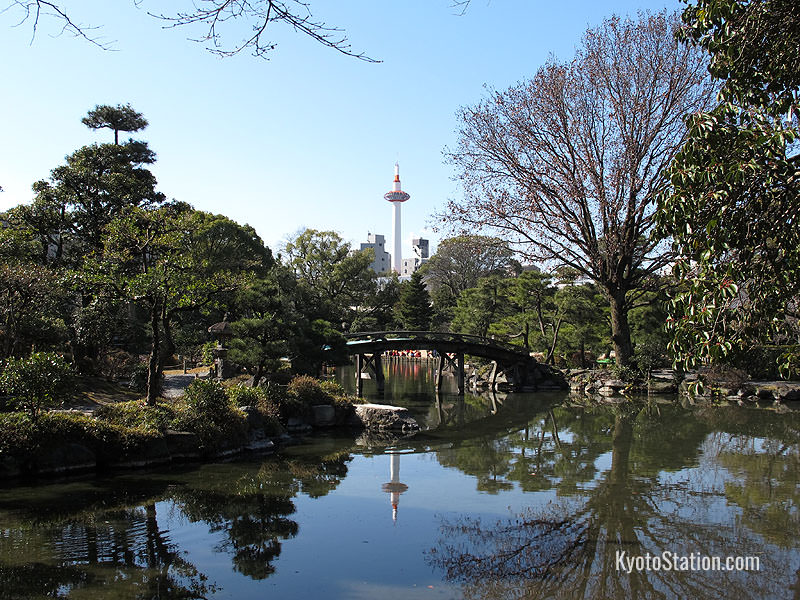