Nishi Honganji Temple is a large temple compound located north west of Kyoto Station with many beautiful buildings of historical and architectural significance. It is one of two head temples of the Jodo Shinshu sect of Buddhism in Kyoto. Both of these temples are called Honganji, and so are distinguished by their location: Nishi Honganji being the western temple, and Higashi Honganji being the eastern temple. Jodo Shinshu, is the most mainstream and common form of Buddhism in Japan, so a visit to either temple will give you great insight into contemporary Japanese religious belief. 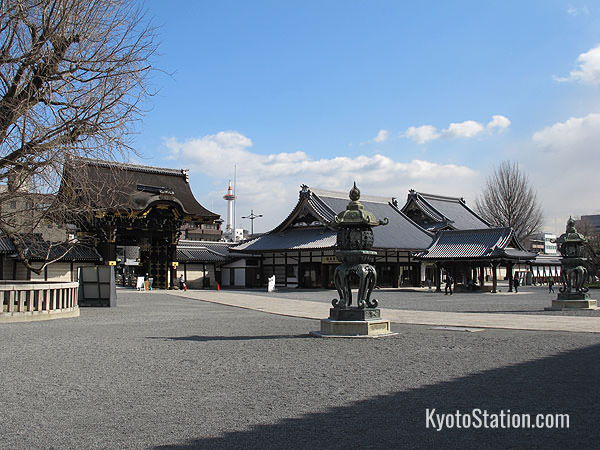 Inside the temple compound of Nishi Honganji

Entry to the Nishi Honganji temple grounds is completely free, and many of the buildings can be entered and viewed without restriction. To read more about the eastern temple, read our article on Higashi Honganji. This article is a short guide to the history of the western temple and its main buildings.

The Jodo Shinshu sect of Buddhism was founded by the monk Shinran who lived from 1173 to 1263. Shinran believed that Amida Buddha had made a vow to save all who called on his help, and that to be saved one should simply trust in Amida Buddha’s vow. This simple teaching was, and still is, very popular among all classes of people, and today it is the most popular form of Buddhism in Japan. In 1272, after Shinran had passed away, the first Honganji Temple was built to continue his work. However, over the next 300 years the temple was forced to change its location many times, due to social, religious and political turmoil. In 1591 the temple was granted land in Kyoto, and this is the site of the current Nishi Honganji Temple. In 1617 a fire destroyed many of the original temple buildings, so some were replaced by structures from the dismantled Fushimi Castle. 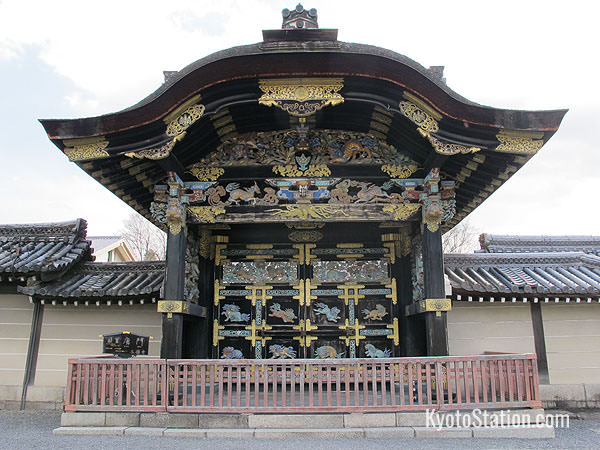 The Karamon Gate at Nishi Honganji is believed to have originally been part of Fushimi Castle. This view of the gate is from inside the temple grounds

The reason there are now two Honganji temples in Kyoto is simply political. In the early 17th century, Tokugawa Ieyasu, the Shogun who ruled Japan, encouraged a schism between two rival factions of the Honganji lineage, so that the group as a whole would not become too powerful. A separate Honganji temple was built to the east of the original, and was called Higashi Honganji, or Eastern Honganji. For this reason the original Honganji is now called Nishi Honganji, or Western Honganji, to clear up any confusion. The eastern temple was almost completely destroyed by fire in 1864, and so most of its buildings are late 19th century or early 20th century reconstructions. Nishi Honganji however, escaped the worst of the flames and so its buildings are much older and it houses many fine architectural specimens. Many of the buildings are listed as National Treasures and the temple as a whole is a registered UNESCO World Heritage Site. 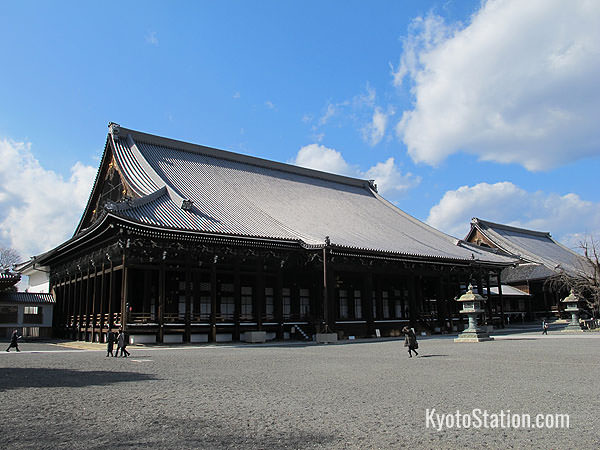 The Founder’s Hall of Nishi Honganji

The Goei-do, or Founder’s Hall, was completed in 1636 and is a registered National Treaure. Though not as big as the Founder’s Hall at nearby Higashi Honganji Temple, this is still a huge building measuring 62 meters long by 48 meters wide with a height of 29 meters. Inside on the central altar there is a wooden statue of Shinran, the founder of the Jodo Shinshu Sect. The statue is said to have been carved by Shinran himself, and after his death, some of his ashes were mixed into the varnish. This makes the statue an especially sacred relic for Jodo Shinshu followers. 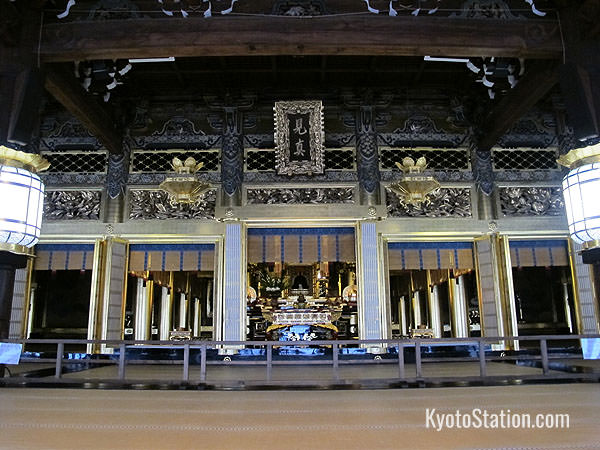 Inside the Founder’s Hall

Above the altar, there is a framed tablet on which the characters見真, or “see truth” are inscribed in gold. This is an honorary title that was given to Shinran after his death, by the Emperor Meiji, and the characters are copied from the emperor’s own calligraphy. You can see a similar tablet in the Founder’s Hall at Higashi Honganji Temple too. 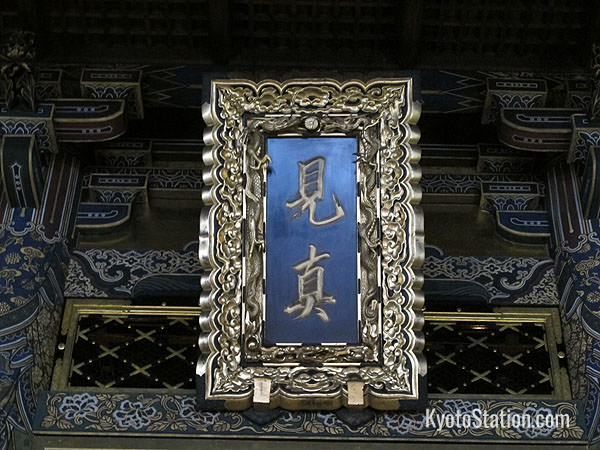 The calligraphy of an emperor 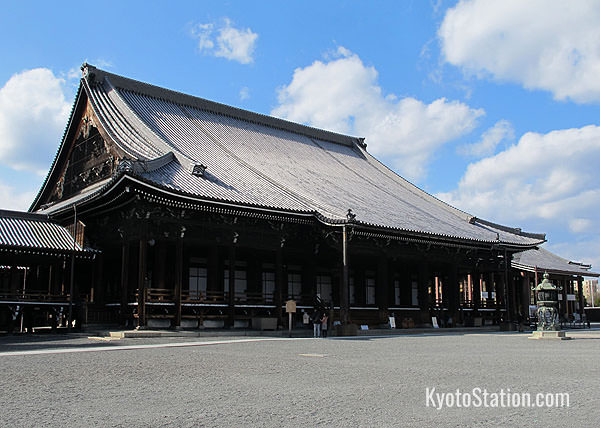 The Amida-do or Amida Hall is the main worship hall, or hondo, of the temple and was completed in 1760. Enshrined on the central altar is an image of Amida Buddha, who followers believe has vowed to save all those who call on his help. In the left hand side alcove is a portrait of Shinran’s teacher, the monk Hōnen (1133 –1212). Hōnen taught that people who repeat the Buddha’s name will be saved and reborn in the Pure Land. In the right hand alcove is a portrait of Prince Shōtoku Taishi (574 – 622) who played such an important role in introducing Buddhism to Japan that he is known as the father of Japanese Buddhism. This building is also a registered National Treasure. 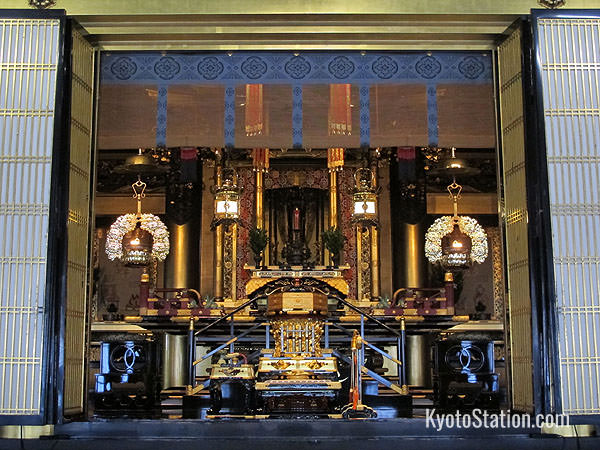 Inside the Amida Hall 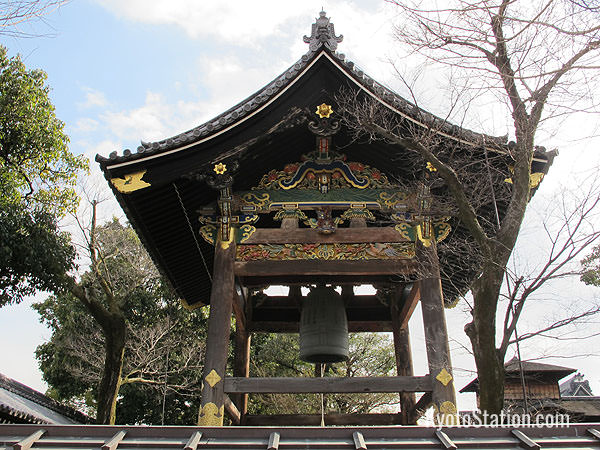 This ornate Shoro, or bell tower, is situated in the south east corner of the temple compound. It was built in 1620, but the bell predates that, and was originally the bell of Koryuji Temple in western Kyoto. 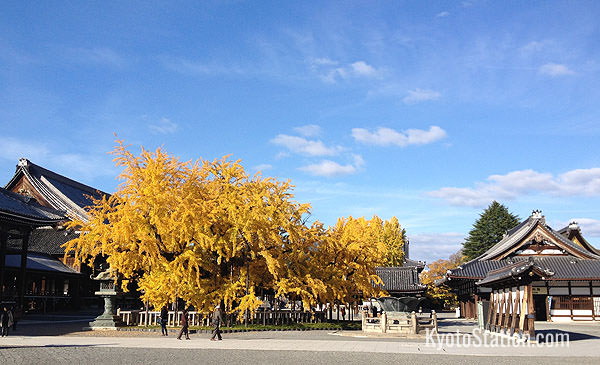 Directly in front of the Founder’s Hall is a huge gingko tree that is estimated to be over 400 years old. There is a legend that when the temple caught fire, the tree actually showered the buildings with water from its leaves and saved the temple from the flames. If you are lucky enough to visit the temple in mid to late November, then you can see the tree in its full autumn glory bearing a wonderful crown of golden leaves. 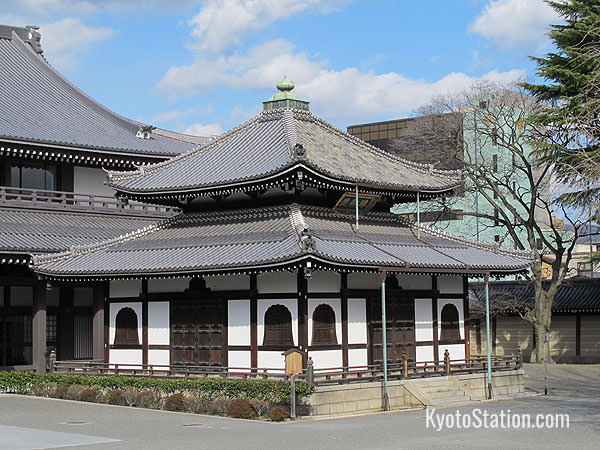 The Kyōzō or Scripture Repository

This building was completed in 1678 and holds a huge collection of Buddhist scriptural texts compiled by the monk Tenkai. Nishi Honganji bought the collection from the Tokugawa government in 1648 for 100 kilograms of silver. The repository was registered as a Cultural Asset in 2014. 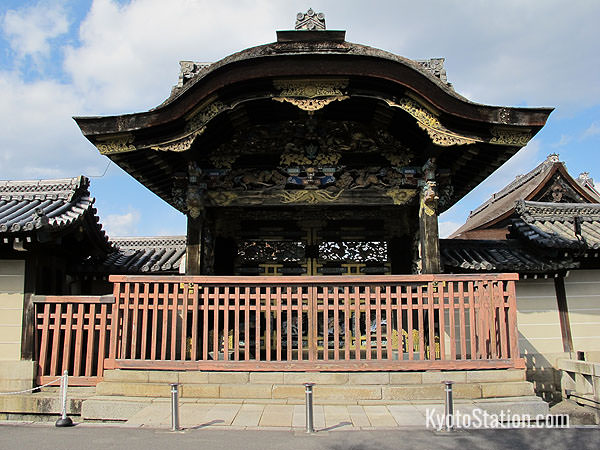 Thatched with cypress and decorated in an ornate Chinese style, this gate is called the Karamon, or “Chinese Gate”. It is also nicknamed the higurashi-mon, or “Twilight Gate” because the carvings are so beautiful that one could easily forget the time and admire them till the sun goes down. You can view the inside of this gate on the southern side of the temple compound. Because this gate is kept closed, to view the outside of this structure you will need to leave the temple compound and follow the walls around to the Kitakoji lane that runs between Nishi Honganji and Ryukoku University. It is not a long walk, and well worth the effort. 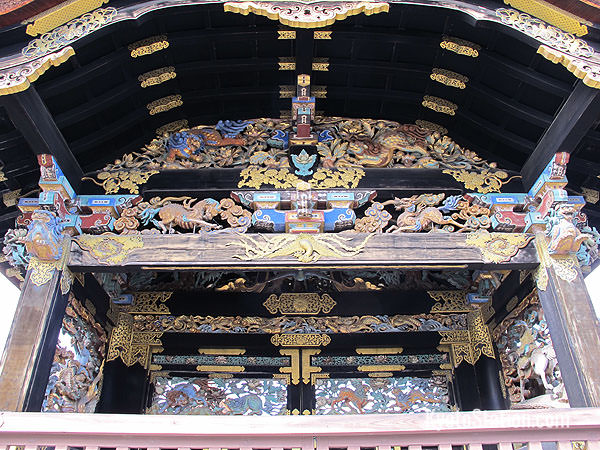 A close-up view of the Karamon gate’s elaborate decorations 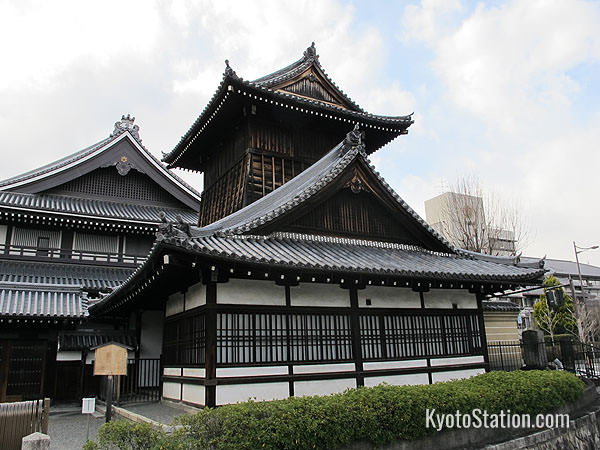 The Drum Tower viewed from outside the compound

This tower is situated in the north east corner of the temple compound but is actually easier to view from the outside of the grounds. Inside are kept a pair of ancient temple drums that came from Saidaiji Temple in Nara. These drums would have been used to let monks know the time of day. It is said that the Shinsengumi, a famous samurai band of 19th century law enforcers, used this tower as a base when they commandeered the temple grounds for training. 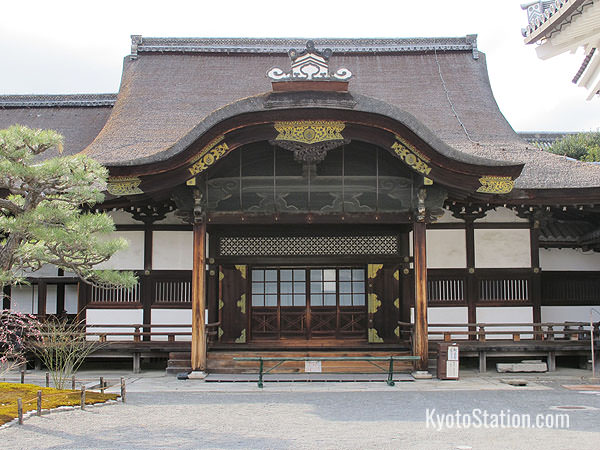 Among Nishi Honganji’s architectural treasures, there are some that have restricted access. These include the beautifully decorated Shoin, a building that houses the abbot’s rooms; Japan’s oldest Noh stage which was brought from Fushimi Castle; a very fine dry landscape garden; and Hiunkaku: the Flying Cloud Pavilion. Along with the famous Golden and Silver Pavilions, Hiunkaku is listed as one of Kyoto’s three famous pavilions. Until recently it was possible to visit these areas of Nishi Honganji as part of an official temple tour. These tours were held on a regular basis and could be booked in advance. However, since 2015 the temple has changed this system and no longer organizes regular tours. Unfortunately, these special areas of the temple are now only opened to the public on an irregular basis and the only way to find out when they are opened is to contact the temple directly. Also, even if you do manage to visit the temple when these areas are open, any photography of the Shoin, the garden and the pavilion is strictly forbidden. To find out when the next scheduled openings will be, ask your tour operator or hotel concierge to make a telephone enquiry at 075-371-5181. 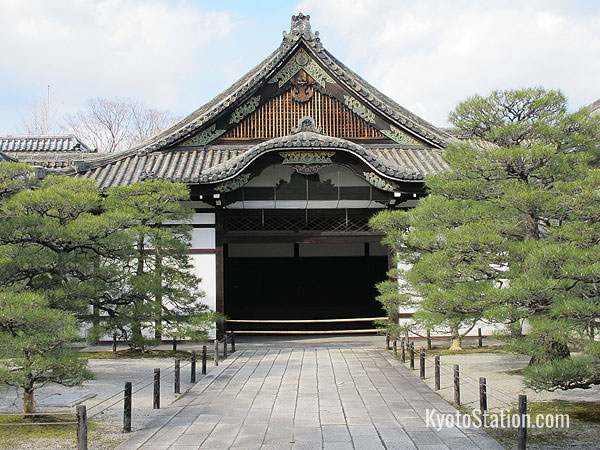 The Bookshop, Café and Souvenir Shop

On the north-east side of the temple compound is a bookshop that has books in English, Spanish and Portuguese. Among them are religious texts but also some fine pictorial books with photographs of the temple through the seasons, that would make fine souvenirs. There are also some DVDs with animated Buddhist stories, including the life of Shinran, that have English subtitles. The bookshop is open from 9:00 till 17:00 on weekdays, and 9:00 till 16:00 on weekends and holidays. Just across from bookshop there is a souvenir shop and a café that serves breakfast and light meals. The shop is open from 8:45 till 17:00 and the café is open from 7:30 – 17:00.

The main entrance of Nishi Honganji Temple is located north west of Kyoto Station on Horikawa Street. You can walk there in 15 to 20 minutes or take a bus or a taxi and be there in under 5 minutes. 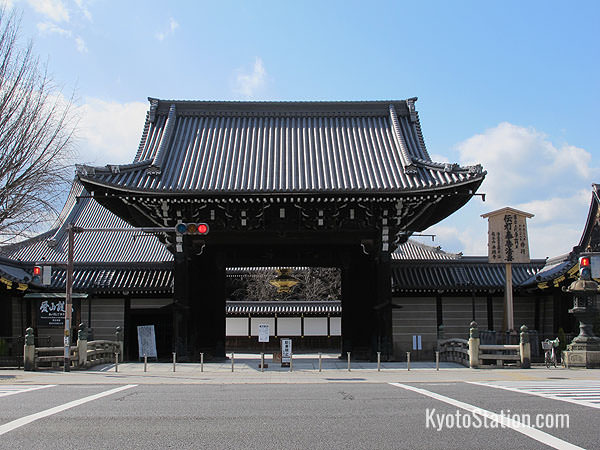 The Goeido-mon is the main entrance to Nishi Honganji 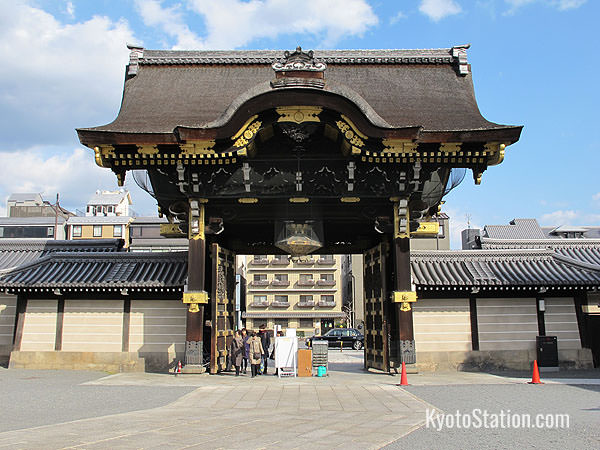 The following Kyoto City buses go to the Nishi Honganji Mae Bus Stop: 特33, #9, #50, #28. The easiest way to get there on foot is to walk north from the station on Karasuma Street until you reach Shichijo Street. Then turn left and head west until you reach Horikawa Street. Turn right and walk north on Horikawa until you see two large wooden gates facing each other on either side of the street. The gate on your left is the main entrance to Nishi Honganji. 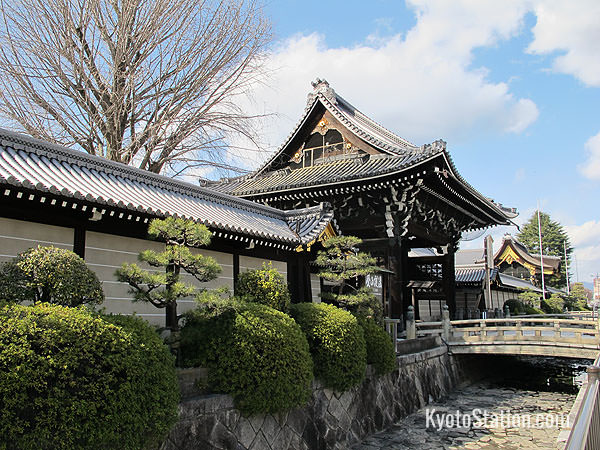