Keihan Electric Railway is a private company that operates a number of rail lines in the Kyoto, Shiga and Osaka areas. None of these rail lines pass through Kyoto Station, and they are not covered by the Japan Rail Pass. However, they are very convenient when traveling between Kyoto and Osaka, or when traveling between major tourist locations in Kyoto. In this article we will focus on the Keihan Main Line which is the most useful line for visitors to Kyoto. 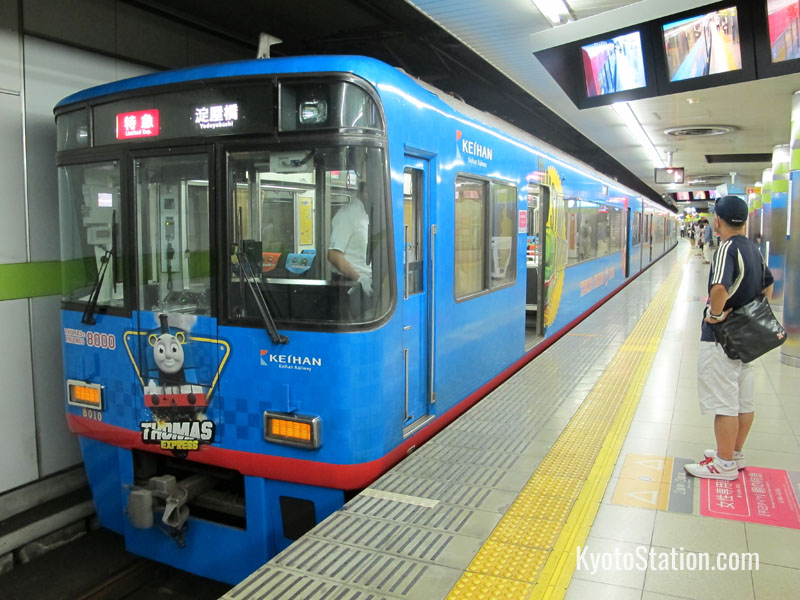 A Limited Express at Demachiyanagi Station

The Keihan Man Line does not connect directly with Kyoto Station. The closest transfer point is at Tofukuji which has both a JR and Keihan Station. Kyoto Station is one stop north of Tofukuji.

In the south however, the Keihan Main Line is extended by the Nakanoshima Line from Osaka’s Temmabashi Station to Nakanoshima Station. Some trains run all the way from Demachiyanagi through to Yodoyabashi, but others go to Nakanoshima, so you should be careful which train you board when heading to Osaka.

Because the Keihan Main Line runs north to south through the center of Kyoto city, and because its stations are reasonably close to many of Kyoto’s most iconic sightseeing locations, this line is very convenient for getting about Kyoto city. However, it is also a useful line for getting between Kyoto and Osaka. A Limited Express train will get you from Sanjo Station to Yodoyabashi Station in 55 minutes for 410 yen. If you are more centrally located in Kyoto city, and don’t wish to go to Kyoto Station, then this might be the route you choose to get to Osaka.

To visit Uji via the Keihan Main Line you will need to transfer at Chushojima to the Keihan Uji Line. 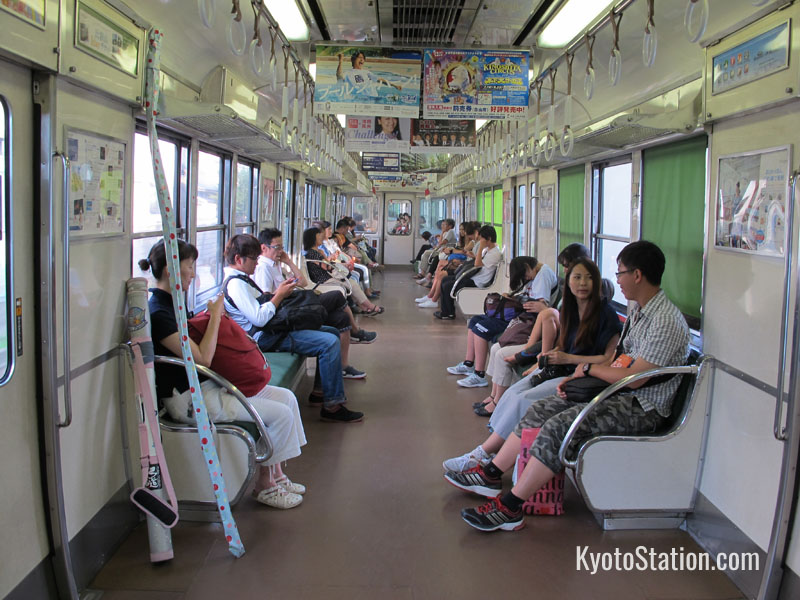 On board a local train on the Keihan Main Line

There are 42 stations between Demachiyanagi and Yodoyabashi. The following are the stations you are most likely to visit.

This station is convenient for visiting the primeval forest of Tadasu-no-Mori and Shimogamo Shrine – a designated UNESCO World Heritage Site. You can also use this station to transfer to the Eizan Eiden Line which connects with the scenic villages of Kibune, Kurama, and to Yase Hieizanguchi Station at the base of Mount Hiei.

This station on Marutamachi Street, lies between Kyoto Imperial Palace Park in the west and Kurodani Temple in the east. Visitors to Kyoto Handicraft Center

Head east from this station and you can access the northern part of the Gion entertainment district and Heian Jingu Shrine. To the west, across Sanjo Bridge, you have immediate access to the Sanjo and Kawaramachi shopping districts, and the northern end of the historic alley of Pontocho. You can also transfer here to the Subway Tozai Line.

This station gives access to the southern end of the historic alley of Pontocho, to the Gion entertainment district, and to Yasaka Shrine. Kyoto-Kawaramachi Station on the Hankyu Kyoto Line is also easily accessed on the west side of Shijo Bridge. Sanjo and Gion-Shijo are the Keihan Main Line’s most central stations in Kyoto.

Despite the name, this station is actually quite a long walk from the beautiful temple of Kiyomizu-dera. On foot it will take you about 20-25 minutes. However, there are plenty of interesting pottery shops along the way.

This station is convenient for Kyoto National Museum and Sanjusangendo Temple which is famous for having 1000 statues of the Buddhist goddess of mercy. You can also walk to Kyoto Station from this station in about 10-15 minutes.

Tofukuji Temple is an expansive Buddhist temple complex 10 minutes walk from Keihan Tofukuji Station. It is famous for its gardens, in particular its moss garden, and for maple leaf viewing in the autumn. You can also transfer here to the JR Nara Line at JR Tofukuji Station.

Fushimi-Inari Station is a short walk from Fushimi Inari Taisha Shrine. This Shinto shrine is Kyoto’s most popular tourist destination. It is famous for its fox statues and for the trail up Inari Mountain which is lined with thousands of vermilion torii gates. JR Inari Station on the JR Nara Line also serves this area.

Many people change here between Limited Express and Local trains. You can also transfer here to the Kintetsu Kyoto Line .

At Chushojima you can transfer between the Keihan Main Line and Keihan Uji Line. This station also gives access to the sake breweries and canals of the southern Fushimi area. Local attractions include the Gekkeikan Okura Sake Museum and the Teradaya Inn, a museum dedicated to the 19th century samurai Ryoma Sakamoto.

This station is a five minute walk from Kyoto Racecourse, “the premier racecourse of Western Japan”.

This station is a three minute walk from Hirakata Park, a popular location for families with children. “Hirapa” as it is affectionately known, dates from 1910 and is Japan’s oldest amusement park. It is especially popular in the summer for its pool, and in the winter for its ice rink.

Kyobashi itself is a large commercial and entertainment district in Osaka city, packed with bars and restaurants. There are actually three stations here, so it is an important transfer point between the Keihan Main Line, and several lines runs by JR West (the Osaka Loop Line, the JR Tozai Line, the Katamachi Line) and by Osaka Municipal Subway (the Nagahori Tsurumi-ryokuchi Line). Within Keihan Kyobashi Station this is a transfer point between trains bound for Yodoyabashi or Nakanoshima.

This is the last transfer point between the Keihan Main Line and the Nakanoshima Line.

Yodoyabashi is the closest station to Osaka City Hall. Here you can transfer to the Subway Midosuji Line which connects to Osaka’s major commercial and entertainment districts of Umeda and Namba. 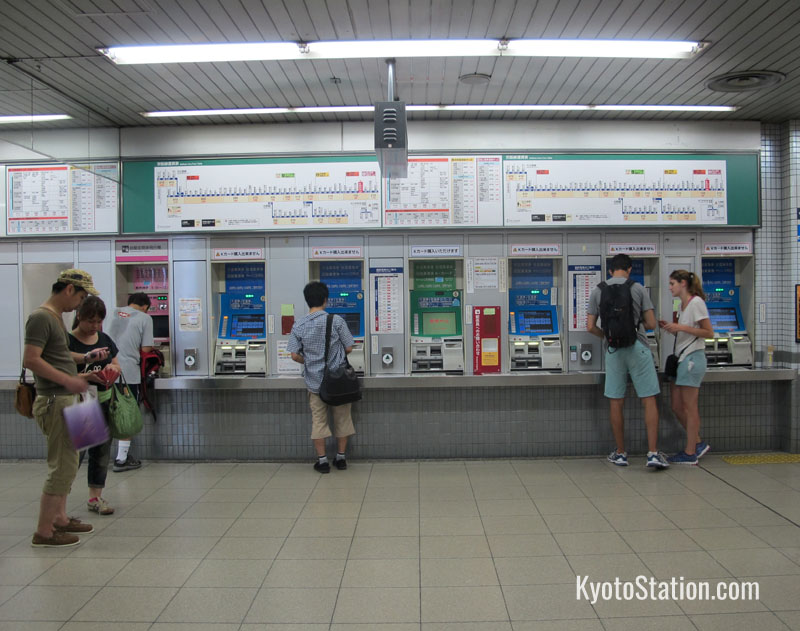 As Keihan Electric Railway is operated by a private company it is not covered by the Japan Rail Pass. However, a one-day discount sightseeing pass for the Keihan lines in Kyoto, or a one or two-day pass for Kyoto and Osaka are available. These passes also come with a free set of coupons for some of the main sightseeing locations en route. If you are planning to travel between Keihan stations a lot, then this is certainly a good option. Visit the official Keihan Railway website to find out more. 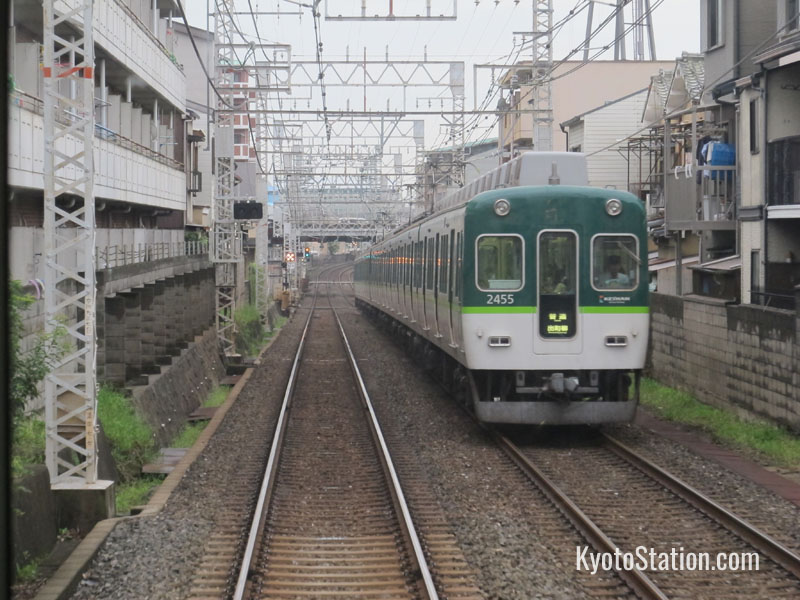 The Keihan Main Line is served by a bewildering variety of train types. The main ones are: Limited Express, Rapid Express, Express, Sub-express, Semi-express and Local. You should be careful to get on the right train for your stop. If you are heading to Osaka, a Local train would obviously take too long. Traveling within Kyoto however, the faster trains might skip your station. The official Keihan Railway website has a guide to train types, but to find a suitable train quickly and easily it is best to use an English language online route finder like Jorudan or Hyperdia.

You can find timetables, and station maps for the Keihan Main Line here. The official Keihan Railway website also has a free downloadable route map of all the Keihan lines and stations here.