Close by Nishi Honganji Temple are two unique museums, and a number of interesting old buildings. If you are interested in Buddhist art and history then you might want to try the Ryukoku Museum, and then take a look at some of the shops selling Buddhist goods on Shomen Dori Street. Alternatively if you are interested in the history of Kyoto during the Heian period, over a thousand years ago, then the Costume Museum might be for you. Let’s take a look at each of these locations in turn.

On the eastern side of Horikawa Street, across from Nishi Honganji Temple, you can see a large modern building with huge ceramic blinds. This is the Ryukoku Museum, the largest museum in the world completely dedicated to Buddhist artifacts. 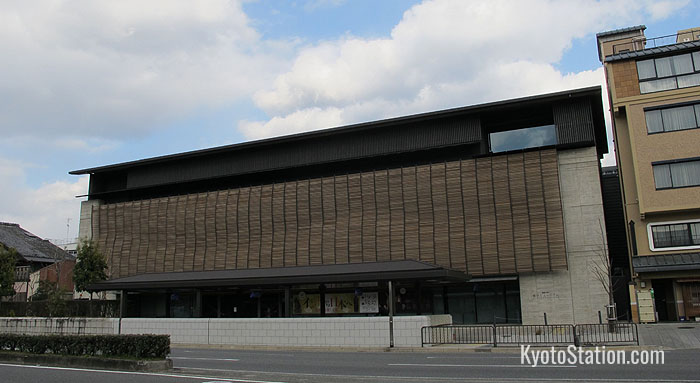 The Ryukoku Museum: the ceramic blinds give it a distinctive Kyoto appearance

Ryukoku Museum was built to showcase the enormous collection of Buddhist art and historical treasures owned by Ryukoku University and opened in 2011. Ryukoku University was established by Nishi Honganji Temple in 1639 which makes it Kyoto’s oldest university. During the early 20th century the university amassed a huge collection of historical and artistic items from archaeological expeditions along Central Asia’s Silk Road. Many of these items are now on display in the museum. Permanent exhibitions trace the history of Buddhism in Asia and Japan, with many ancient statues, murals and other relics. Most notable is the digital recreation of the cave paintings of Bezeklik. Deep in the Taklamakan Desert in China, is an ancient complex of grottos, once completely decorated with colorful Buddhist murals, which over time have been terribly damaged and are in very poor condition. Scholars at Ryukoku University have digitally recreated a portion of this grotto, and you can now walk through a passageway in the museum decorated from the floor to the ceiling with these glorious images. 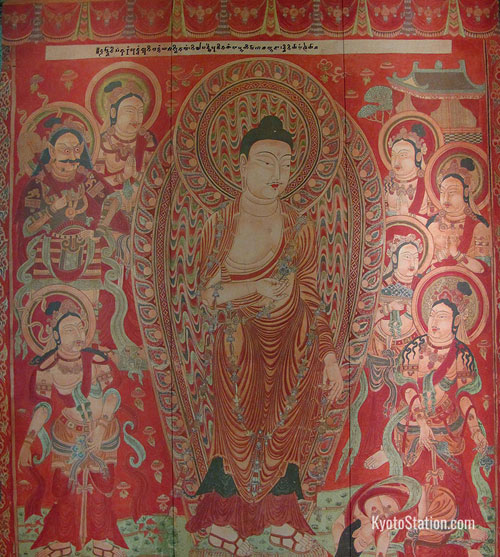 Among the museum’s facilities are a souvenir shop, café and coin lockers. At the reception desk they have English pamphlets which list the various exhibits and give some basic information about their age, material and place of origin. More detailed information however, is written solely in Japanese, so you may want to bring a Japanese guide with you. Within the exhibition rooms, photography is forbidden. 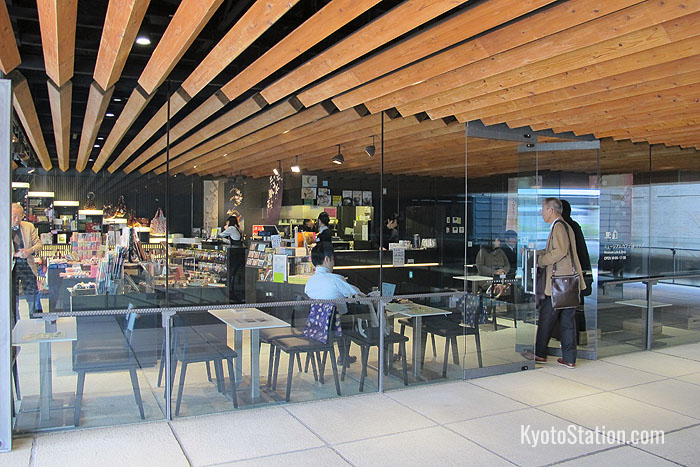 Ryukoku Museum is located north west of Kyoto Station on Horikawa Street. You can walk there in 15 to 20 minutes or take a bus or a taxi and be there in under 5 minutes. The following Kyoto City buses go to the Nishi Honganji Mae Bus Stop: 特33, #9, #50, #28. The easiest way to get there on foot is to walk north from the station on Karasuma Street until you reach Shichijo Street. Then turn left and head west until you reach Horikawa Street. Turn right and walk north on Horikawa until you see the museum’s distinctive blinds on the right side of the street. Here is a map.

Opening Hours:
Tuesday – Sunday: 10:00 – 17:00 (Last entry: 16:30)
Closed on Mondays, national holidays, and between special exhibitions. Check the museum schedule to be sure it is open when you plan to visit.

Walk north from the Ryukoku Museum on Horikawa Street and you will see an enormous wooden gate, which stands directly across from the main gate of Nishi Honganji Temple. 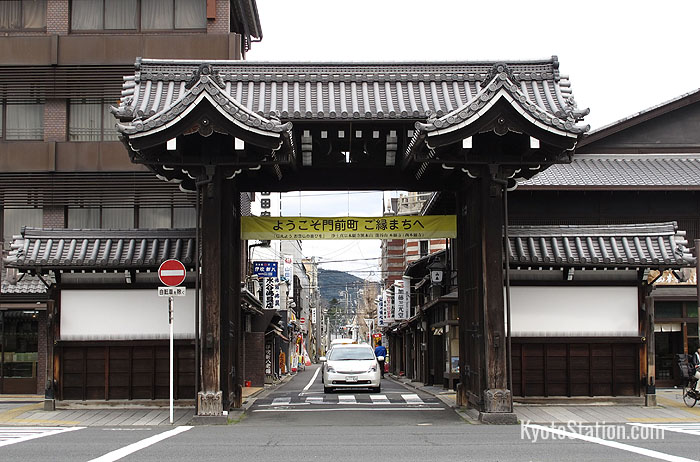 This is the Somon, which was originally a gate of Nishi Honganji and is believed to date from 1711. Built to mark a division between the secular and sacred spheres inside and outside the temple, it seems that there was originally more than one Somon gate, but today only this one remains. What is more, this gate has been moved three times. The first time was in 1898, when it was moved a little to the east of its original position to make way for a fountain in the temple garden. Then in 1911, there was an important religious celebration at Nishi Honganji, and it was believed the gate would obstruct the flow of pilgrims. At that time the fountain was removed, and the gate returned to its original position. Finally, in 1959, Kyoto City officials appealed to the temple to move the gate once more, so that they could expand Horikawa Street for increasing traffic. In response, the gate was moved 6 meters east and 45cms north, so that it would fit snugly to the entrance of Shomen Dori Street. A fence that used to flank it on either side was removed too, so that now the gate stands isolated from any other structure. Looking at it from the Nishi Honganji side we can see shops selling Buddhist goods, and from the Shomen Dori side we can see the traffic on Horikawa Street and the temple. Without knowing anything about its history or circumstances it might seem a little strange, but actually this gate tells us a lot about the peculiar ways in which both Nishi Honganji and the city itself have changed over time. 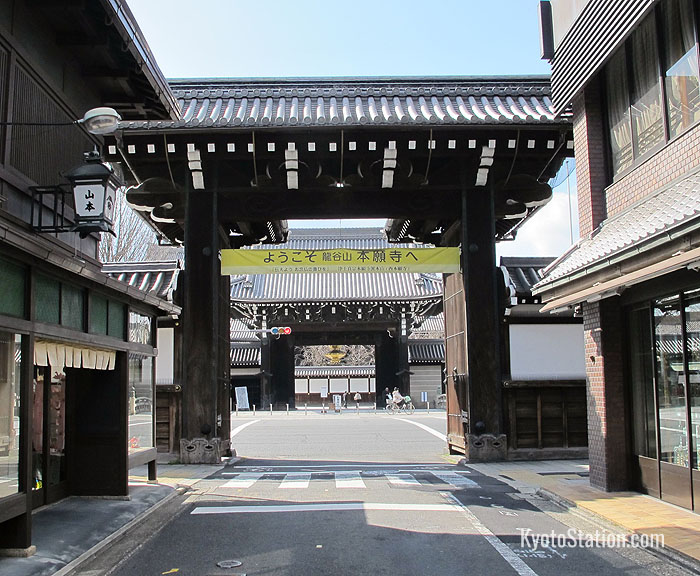 The view of Nishi Honganji from the Somon gate

If you go through the Somon Gate onto Shomen Dori Street you can see many old machiya style wooden townhouses, containing shops selling Buddhist paraphernalia. As machiya buildings are becoming increasingly rare, this area gives you a little flavor of life in old Kyoto. 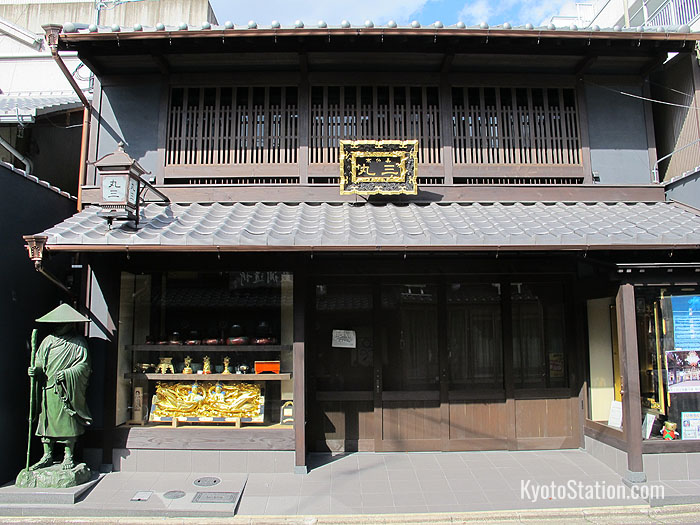 A machiya building on Shomen Dori

Selling statues, beads, candle sticks, family altars and other religious regalia, some of these shops are family businesses that have stood here for generations. 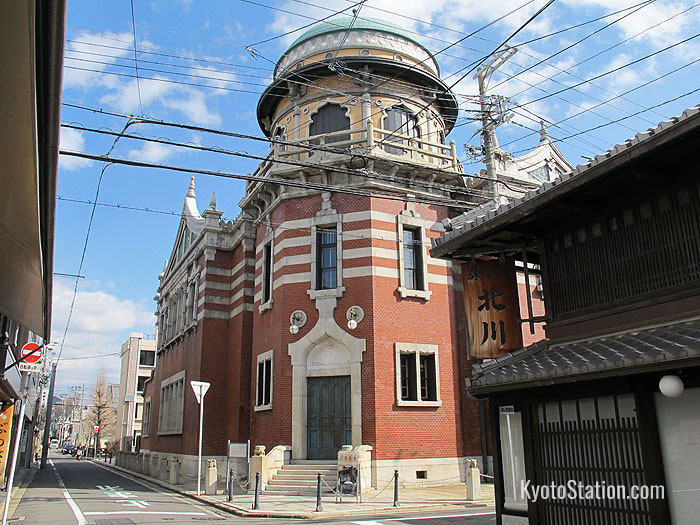 One building on the street, that will certainly catch your eye, is the Dendoin. An odd blend of Eastern and Western influences it is topped with an unusual domed roof, and encircled by posts topped with gargoyles. Designated a Cultural Asset by Kyoto City, it was built by Ito Chuta (1867–1954) a leading architect of the early 20th century. The building is owned by Nishi Honganji Temple and is not open to the public.

To get to the Costume Museum, return to Horikawa Street and head north. This curious little museum was opened in 1974, originally to display a number of life sized Japanese traditional costumes, dating from ancient times to the present day. 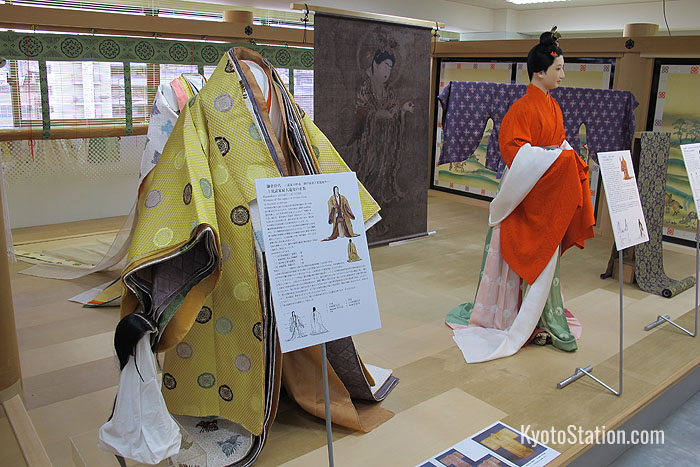 Life sized costumes on display at the museum

Currently there are only a small number of life sized costumes on display however. Most of the museum is dominated by a large scale model depicting scenes from Murasaki Shikibu’s “Tale of Genji” – the world’s first novel. 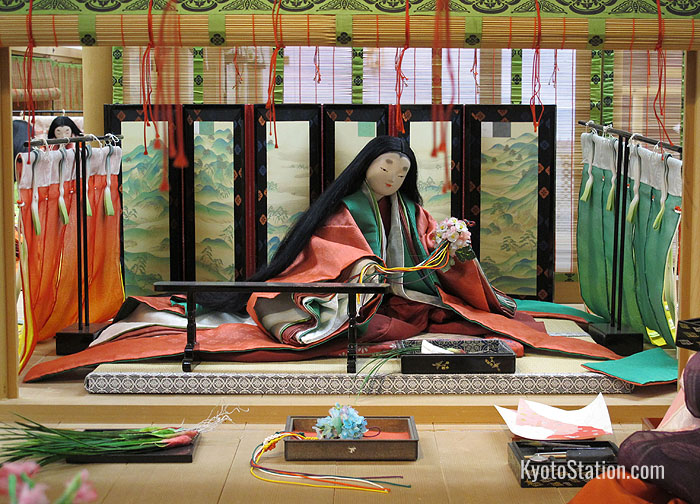 The models are wonderfully detailed and give a lot of insight into the costumes and customs of Heian era life. In contrast to the Ryukoku Museum, there is also no restriction on photography here, and there is plenty of detailed English language information on hand to help you understand each scene. However, the museum is rather small, so if you are not so interested in this historical period, you may feel that the 500 yen entrance fee is a little expensive. 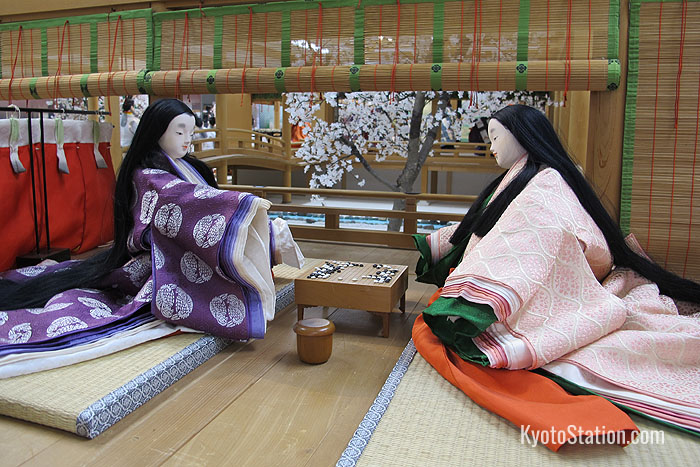 Ladies playing the board game Go 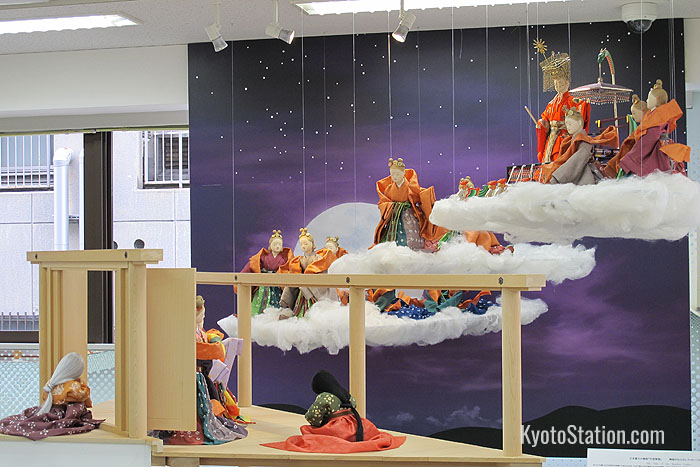 A scene from the Tale of the Bamboo Cutter

The Costume Museum was moved south of its original location in February 2016. You can now find it on the east side of Horikawa just south of Hanayacho Street. It is on the 5th floor of the Izutsu Samegai Building which is easily recognized by the Lawson’s convenience store on the 1st floor. 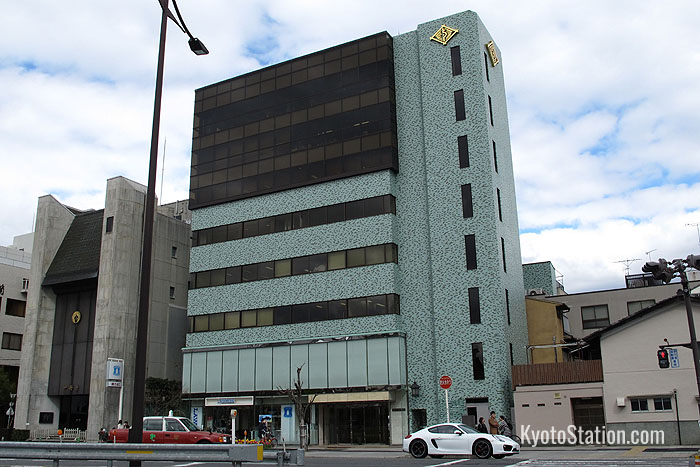