Himeji’s top attraction is its spectacular white castle which is one of only 12 original medieval Japanese castles to survive the last World War. A registered National Treasure and a UNESCO World Heritage Site, the castle is renowned for its stunning beauty. This star quality does tend to overshadow Himeji’s other tourist attractions, and many travelers only visit this city for a day. However, among the city’s parks, gardens, museums and temples are some other sites that might make you want to stay longer. Himeji can be reached from Kyoto in one or two hours and is most easily accessed by train or by car. 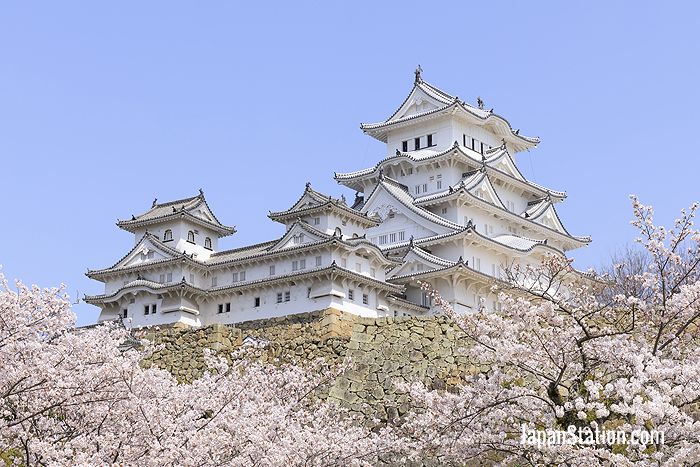 A wooden fort was first built on this site in 1333, and a castle replaced it 1346. The castle has been remodeled, expanded, and rebuilt numerous times since then to become Japan’s largest, most popular, and most beautiful castle. Incredibly it survived the World War 2 bombing raids that did so much damage to surrounding parts of the city. And a five year restoration process which ended in 2015 has now restored the castle rooftops to their original dazzling white appearance. Because of its outstanding beauty this castle is also known as Shirasagi-jo which means “White Heron Castle”.

Viewing the castle may take 1.5 to 2 hours and during busy seasons you may have to wait as long as an hour to get in. The castle tends to draw the biggest crowds during cherry blossom season in early April, and holiday periods such as New Year’s Day, the Golden Week holiday in early May, and the Obon summer break in mid-August.

You can walk to the castle from Himeji Station in about 20 minutes or take a bus from the Shinki Bus Center which is just outside the station’s North Exit and be there in 5 minutes. 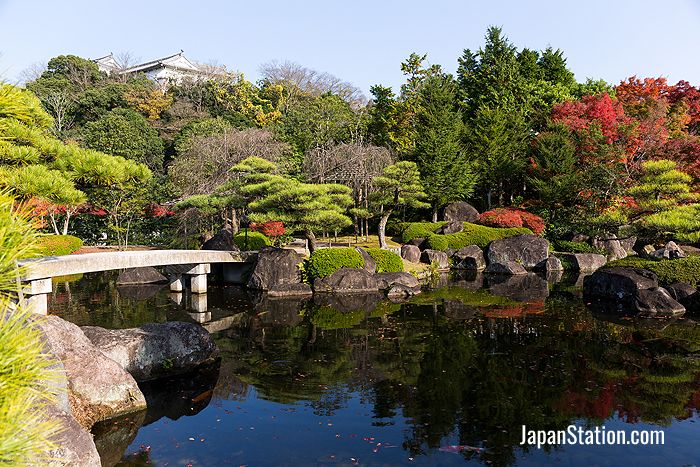 Kokoen Garden is actually a series of nine connected Edo era style strolling gardens that were constructed in 1992 on the site of the old samurai residences below Himeji Castle. The separate gardens are divided by earthern tile topped walls that mark out the old Edo era street plan. Inside the gardens are richly decorated with ponds, waterfalls, and tea houses, and in one corner of the grounds is a restaurant where you can enjoy tea or a meal with a beautiful view.

Engyoji is a large temple complex and a popular site of pilgrimage that sits on top of Mount Shosha in the north west of the city. The temple was founded by the Buddhist saint Shoku Shonin in 966 and dedicated to the Goddess of Mercy. Walking round the many fine examples of traditional architecture here will take at least 2 hours. It is also possible to take part in Tendai style meditation here or in sutra copying activities. 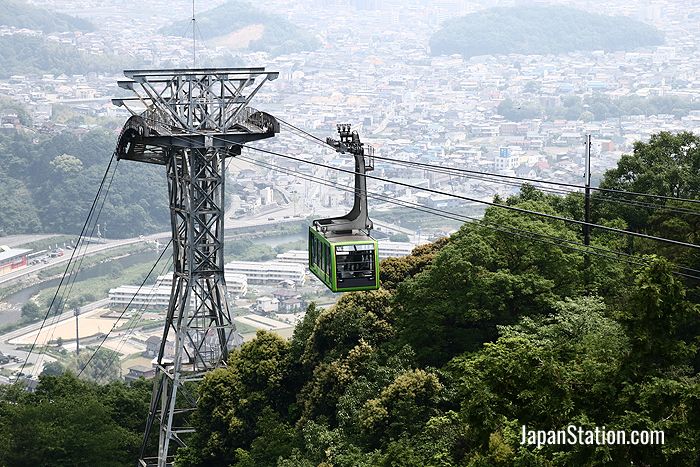 The temple is accessible by bus and ropeway. To get there take a Route #8 bus from bus stop #10 on the north side of Himeji Station. You can get a round-trip discount ticket to Mount Shosha that includes the price of the ropeway. This costs 1,400 yen for adults or 700 yen for children. It takes about 30 minutes to reach the ropeway, and then 5 minutes to go up. At the top there is a shuttle bus that takes you to the temple in 5 minutes. The shuttle bus costs 500 yen for a round trip ticket, or you can save money and walk there in 16 minutes. However, you will still have to pay a 500 yen entrance fee to the holy mountain.

Hyogo Prefectural Museum of History is housed in a building designed by the architect Kenzo Tange. Inside are displays and dioramas in several sections explaining the history of Hyogo Prefecture, of Himeji City and its castle, of Hyogo festivals, and a children’s section with many antique toys. There is a virtual reality theater where you can watch a 3D presentation on Himeji’s history and also a room where you can try on samurai armor or the kimono of an imperial court lady. The museum is open from 10.00 till 17.00 with last entry at 16.30. The museum is closed on Mondays and between December 29th and January 3rd. Entry for the permanent exhibition costs 200 yen for adults and 150 yen for university students. Elementary, junior high and senior high students can enter the museum for free. The museum is a 10 minute walk north of Himeji Castle.

Himeji City Museum of Art is housed in a Meiji era red brick building to the east of Himeji Castle. It exhibits local art work and the paintings and sculptures of European masters such as Monet and Rodin. It is open from 10.00 until 17.00 with last entry at 16.30. It is closed on Mondays and from December 25th to January 5th. Entry to the regular exhibits is 200 yen for adults, 150 yen for senior high and university students, and 100 yen for elementary and junior high students. The museum is a 6 minute walk from Himeji Castle.

Himeji City Museum of Literature is dedicated to the work of nine local writers but as there is not much English language display information it is not really set up with foreign visitors in mind. Travelers who are interested in architecture however, may be interested in viewing the building itself, a minimalist structure of concrete and glass intersected by pools of water which was designed by Tadao Ando. The museum is open from 10.00 until 17.00 with last entry at 16.30. It is closed on Mondays and from December 25th to January 5th. Entry costs 300 yen for adults, 200 yen for senior high and university students, and 100 yen for elementary and junior high students. The museum is a 13 minute walk west of Himeji Castle.

Tegarayama Central Park is a large park to the south of Himeji Station which includes a botanical garden, an aquarium, Himeji City Peace Museum, and a family oriented amusement park which includes a Ferris Wheel and a series of pools with water sliders and wave-making machines. The park is a 5 minute drive by bus or taxi from Himeji Station.

Himeji Central Park has a drive through safari park, an amusement park with a Ferris Wheel and roller coasters, a pool in the summer, and an ice-rink in the winter. This park is a 30 minute bus or taxi ride from Himeji Station. Round trip tickets are available from the Shinki Bus Center outside the station’s North Exit which include admission to the safari park and/or amusement park.

How to Get There

Himeji can be reached easily from Kyoto by shinkansen, by regular JR rail services, or by car. If you have a Japan Rail Pass, the shinkansen is recommended as the fastest and most comfortable way to travel. It is possible to travel to Himeji by other private rail lines, but the route would be too long and complicated to be practical.

There are no direct bus services from Kyoto to Himeji. You could take a bus from Kyoto to Osaka and then transfer to a bus service for Himeji, but this would actually cost more than taking a train and take a much longer time too.

If you are planning to travel Himeji by either a regular JR train or by shinkansen then we recommend using the online JR West Timetable and Route Finder.

The fastest, simplest and most comfortable way to travel from Kyoto to Himeji is by shinkansen. West bound shinkansen services connect Kyoto with Himeji via the Tokaido and Sanyo shinkansen lines. There are direct services from Kyoto Station that will get you to Himeji Station in 44 minutes or 56 minutes depending on the service. If there are no direct services at the time of your departure you may have to transfer at Shin-Osaka Station or Shin-Kobe Station, but you can still get to Himeji in between 51 minutes or 68 minutes depending on the service.

For an unreserved seat a trip to Himeji will cost you 4,750 yen. For a reserved seat it may cost around 5,390 yen, but prices for reserved seats vary by the season, so you should check the fare on the day that you buy your ticket. Please note that among the shinkansen services that depart from Kyoto Station, the Nozomi service is not covered by the Japan Rail Pass.

If you do not mind a slightly longer trip, taking a Special Rapid Service from Kyoto Station is a cheaper option. West bound Special Rapid Services on the JR Kyoto Line are very regular and will get you to Himeji Station in around 95 – 100 minutes for a fare of 2,270 yen. These services can get very busy, so you may have to stand for the first part of the journey. However, after around 24 minutes a lot of passengers will get off at Shin-Osaka Station and that is a good time to get a seat.

Depending on traffic conditions you can travel from Kyoto to Himeji by car in under 1 hour and 10 minutes via the Meishin Expressway, Shin-Meishin Expressway, and Sanyo Expressway. You can expect to pay around 3,050 yen in toll fees for the journey, but of course renting the car will cost more. There are a number of reliable car rental businesses around Kyoto Station. For more information on these, please see our article Car Rental in Kyoto.

Your first stop in Himeji should be Himeji City Tourist Information Center, which is close by the North Exit in Himeji Station. There you can pick up free maps, get touring advice from the English speaking staff, use free Wi-Fi, and recharge your mobile phone. The information center also has a limited number of bicycles which can be borrowed for free.

To get around town you can use the sightseeing Loop Bus, a retro style bus, that runs from the Shinki Bus Center which is outside the North Exit of Himeji Station. The Loop Bus runs regularly from 9.00 till 17.00 and stops at the following locations:

You can download a detailed PDF Himeji Transportation Guide from the Himeji City Tourist Site which includes maps and a table of bus and taxi fares for all the major tourist attractions.