The Keifuku Randen Tram Line is operated by the private company Keifuku Electric Railroad. The Randen actually consists of two lines in the west of Kyoto city. The Arashiyama Line runs east –west from Shijo-Omiya Station to Keifuku Arashiyama Station. The Kitano Line branches from the Arashiyama Line at Katabiranotsuji Station and runs north to Kitano-Hakubaicho Station.

Local people have a special nostalgic fondness for the Randen, because it is the last remnant of a network of tramlines that once served the whole city. The scenic routes along both lines also make for a very pleasant journey. 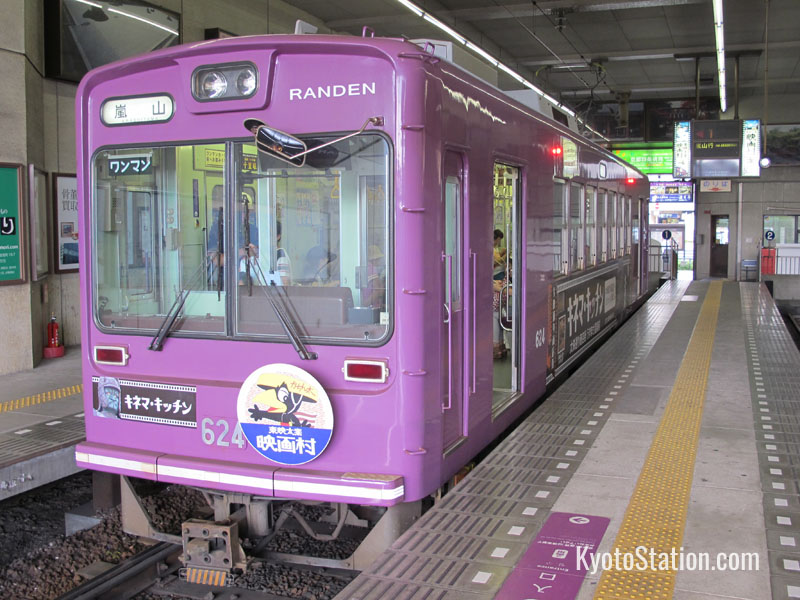 Keifuku Electric Railroad also runs the Eizan Cable Car and Eizan Ropeway for Mount Hiei. You can read about those services in our article on the Eizan Electric Railway. 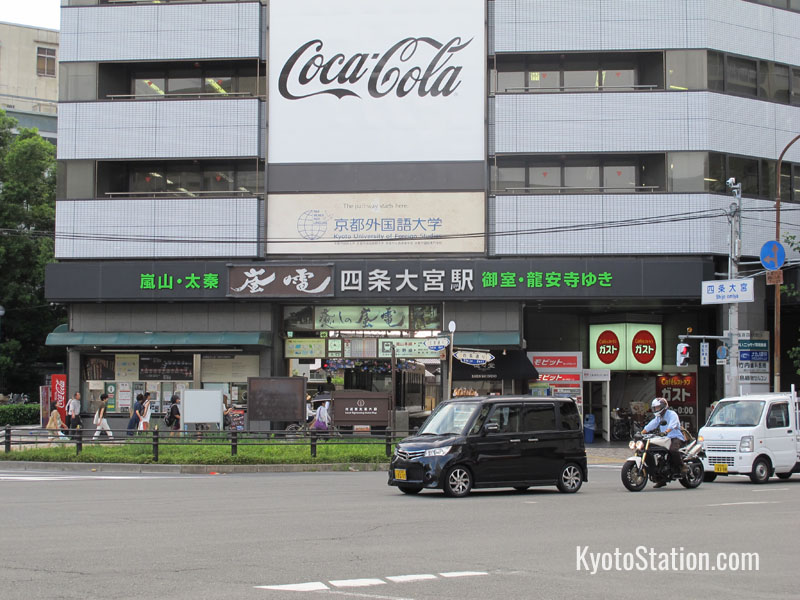 Key Destinations on the Arashiyama Line

This is the beginning of the Randen Line and the transfer station with Hankyu Omiya Station. The Hankyu Line connects Omiya with the center of the city at Karasuma and Kyoto-Kawaramachi Stations.

The lively area around Sai Station is packed with shops, restaurants and bars. This is also a transfer point with the Hankyu Line at nearby Saiin Station. In addition, City Bus 205 departs from here for Kinkakuji (The Golden Temple). The bus takes 16 minutes and costs 230 yen.

The big attraction here is the Toei Uzumasa Eigamura theme park also known as Toei Kyoto Studio Park. This theme park is also a working film set used to make historical dramas, usually featuring samurai warriors of the Edo era. Among the attractions are sword fighting displays, ninja performances, a maze and a haunted house. It is also possible to dress up in costume and watch the filming of TV dramas and movies. Here you can transfer to Uzumasa Tenjingawa Station on the Tozai Subway Line, and JR Uzumasa Station.

Exit here for Koryuji Temple, the oldest Buddhist temple in Kyoto, which is famous for its wooden statue of the “future Buddha”.

This is the transfer station for the Kitano Line.

Disembark here for the Zen temple of Rokuoin. Its garden is notable for its maple leaves in the autumn.

This station gives access to the scenic Arashiyama and Sagano area, one of the major tourist attractions in Kyoto. Famous sites in this area include, the Togetsukyo Bridge, Tenryuji Temple, the Arashiyama Monkey Park and the famous bamboo forest. Rickshaw rides and boating on the river are also popular activities. 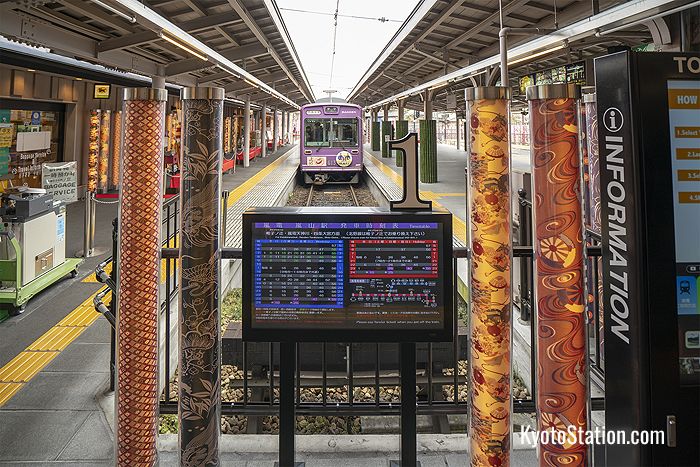 Keifuku Arashiyama Station’s unique point is that it also has a hot spring footbath in which (for 200 yen) you can rest your weary feet! Towels are provided at the station. 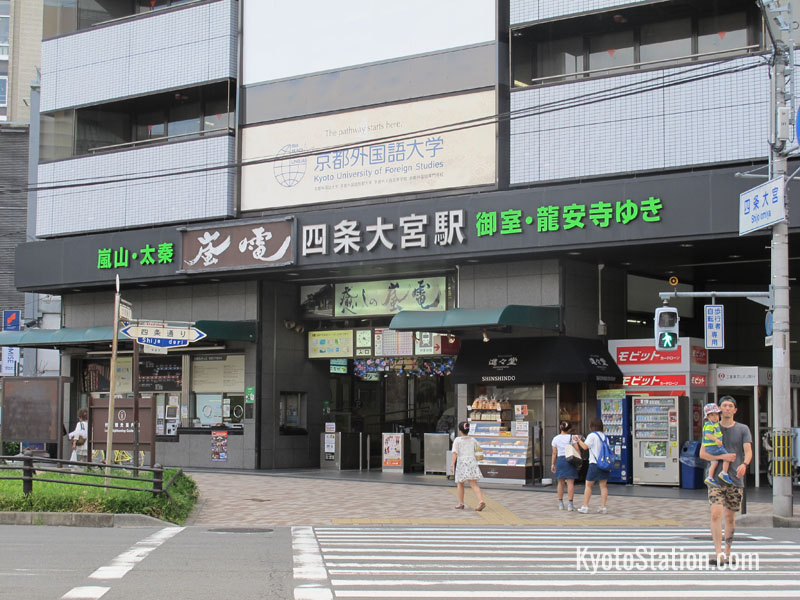 Key Destinations on the Kitano Line

This is the transfer station for the Arashiyama Line.

Between Narutaki Station and Utano Station on the Kitano Line there is a “tunnel” of cherry trees. For one week during peak cherry blossom viewing season the tram will slow down so that passengers can fully enjoy these blossoms, and in the evening the trees are illuminated and the lights on the tram will be turned off. The cherry trees bloom roughly between the end of March and early April.

Alight here for the Myoshinji Temple Complex. There are about 40 subtemples in and around this complex, most of which are not open to the public but you can still wander round the passageways between them and peak in at the gates. The four sub-temples that are open all-year round are Taizo-in, Shunko-in, Daishin-in and Keishun-in. It is possible to stay overnight at Shunkoin and also to take part in zazen meditation practice. The other three temples are famous for their gardens.

This is the stop for the UNESCO World Heritage Site Ryoanji Temple, which has Kyoto’s most celebrated and inscrutable rock garden. The layout of the fifteen rocks in raked white gravel is said to be a physical Zen riddle that will lead those who view it into deep contemplation. Ryoanji Temple is also a short walk away from another World Heritage Site, Kinkakuji Temple also known as the Golden Pavilion.

Five minutes from this station is Tojiin Temple famous for its garden and for a striking painting of the Buddhist saint Daruma.

The last stop. This station is close by Hirano Shrine and Kitano Tenmangu Shrine. Hirano Shrine is known for its gardens and for a cherry blossom festival that has been held here for over a thousand years. Kitano Tenmangu is famous for its plum blossom orchard, and for a giant flea market that takes place on the 25th of each month. 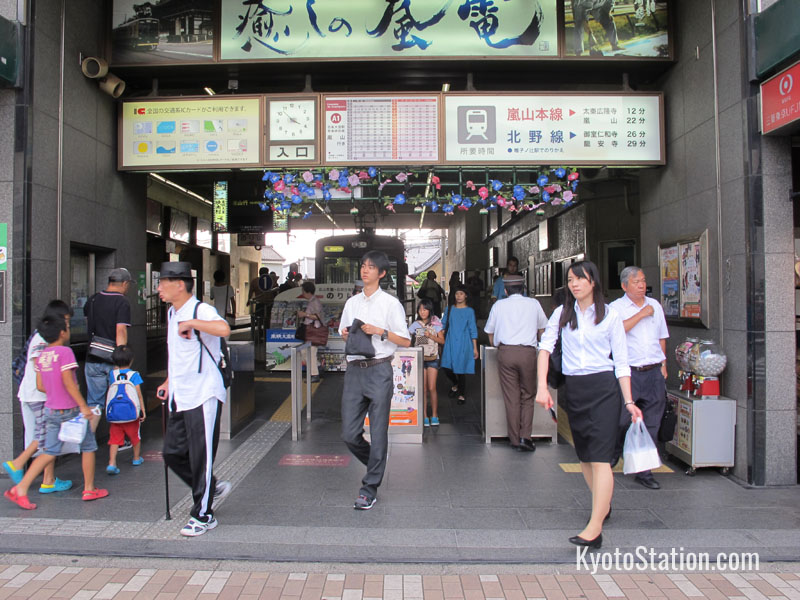 The Randen has a flat fare system of 210 yen for adults and 110 yen for children. Tickets can be bought at the main manned stations. If you enter from an unmanned station, you can pay on board. Trolley cars are entered from the rear and exited from the front. You pay your fare or hand over your ticket at the fare machine when you exit.

As the Randen Line is operated by a private company, it is not covered by the Japan Rail Pass. However, there is a 1-Day Randen Pass that allows you to take unlimited rides on both the Arashiyama and Kitano Lines. This costs 500 yen for adults and 250 yen for children. It also entitles you to some discounts at the shrines, temples and facilities on route – including a 50 yen discount on the footbath at Keifuku Arashiyama station! It is available from the four major Randen stations: Shijo Omiya, Katabiranotsuji, Arashiyama and Kitanohakubaicho.

Visitors from overseas can also get a Kansai Thru Pass (also called the Surutto Kansai Pass) for two or three days. This covers not only the Keifuku Randen Line but many of the private railways, buses and subway systems in Kyoto, Osaka, Kobe, Nara and Shiga. This pass cannot be used on JR Railways however. Visit the Kansai Thru Pass website to find out more.

The PiTaPa pass which is available for local residents cannot be used for the Keifuku Randen Line.

You can find route maps on the official Keifuku Randen website. There is also a free downloadable PDF full of useful information about the Randen lines and the most popular tourist locations en route. For timetables and station maps check the Arukumachi Kyoto site. However, to find a suitable train quickly and easily, it is best to use an English language online route finder like Jorudan or Hyperdia.